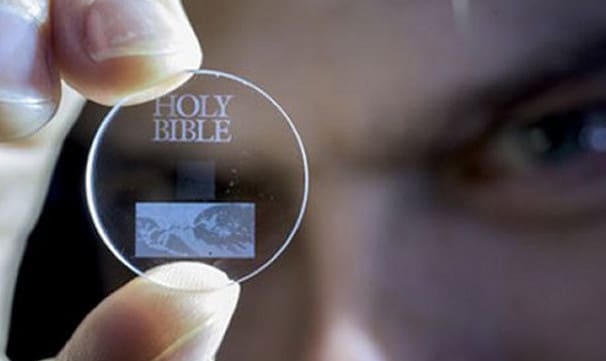 A team of scientists from the University of Southampton have developed a new storage medium that can save up to 360TB of data indefinitely. The university’s Optoelectronics Research Centre (ORC) has developed a five dimensional (5D) recording and retrieval device, using on nanostructured glass and femtosecond laser writing, that can effectively store data forever.

“The storage allows unprecedented properties including 360TB/disc data capacity, thermal stability up to 1,000°C and virtually unlimited lifetime at room temperature (13.8 billion years at 190°C ) opening a new era of eternal data archiving,” the official announcement on the University of Southampton website reads. “As a very stable and safe form of portable memory, the technology could be highly useful for organisations with big archives, such as national archives, museums and libraries, to preserve their information and records.”

The ORC proposes that the technology be used to store historical records, such as Universal Declaration of Human Rights (UDHR), Newton’s Opticks, Magna Carta, and the Kings James Bible, for the sake of preservation, 360TB at a time. Theoretically, these records could even outlive the human race, leaving an indelible documentation of our collective history.

“The documents were recorded using ultrafast laser,” the post continues, “producing extremely short and intense pulses of light. The file is written in three layers of nanostructured dots separated by five micrometres (one millionth of a metre).”

“It is thrilling to think that we have created the technology to preserve documents and information and store it in space for future generations,” Professor Peter Kazansky, from the ORC, said. “This technology can secure the last evidence of our civilisation: all we’ve learnt will not be forgotten.”