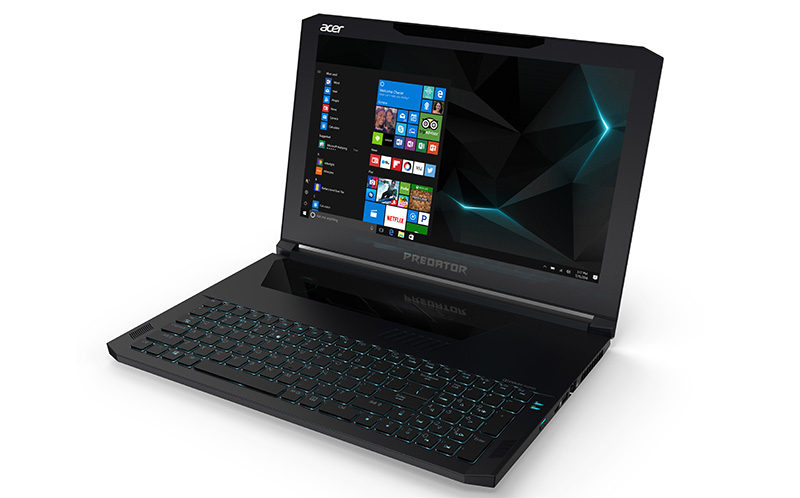 Acer has announced their new Predator Triton 700, designed to be ultra-thin and light compared to the typical gaming notebook, giving gamers an alternative to Razer’s Blade gaming laptop. The Predator Triton 700 is only 18mm tall, which is 0.4mm shy of the Razer Blade at 17.78mm. Its housing is made of aluminum and features a 15.6 inch FHD IPS display panel as well as a mechanical keyboard with a numpad. Inside, it is powered with the latest 7th generation Intel Core processor and the latest NVIDIA GeForce GTX 10-series graphics card, with NVMe PCIe SSD for uncompromised lightning fast storage as well as DDR4 2400MHz memory up to 32GB.

Durability is a concern with laptops that are this thin, so Acer has outfitted a large Corning Gorilla GLass plate above the keyboard. This also serves as a viewing window for the inner workings of the Predator Triton 700, similar to how many gamer desktop these days have a side panel to view the internals. To keep the components cool, Acer utilizes the AeroBlade 3D fan and five heatpipes, which are all viewable through the glass panel. The cool thing about this glass panel is that it also serves as a touchpad in case the user needs it.

“Acer is driving some incredible new products for the gaming and VR-ready category and Intel is excited to work together to push what’s possible on the PC platform,” said Frank Soqui, General Manager of the Virtual Reality and Gaming Group at Intel Corporation. “It’s amazing what can be done with the mobile form factor these days not just at the high end but also for emerging VR in the mainstream – powered by our 7th Generation Intel Core High Performance processors.”