Amazon UK Refers to “The PC Master Race” in Poll 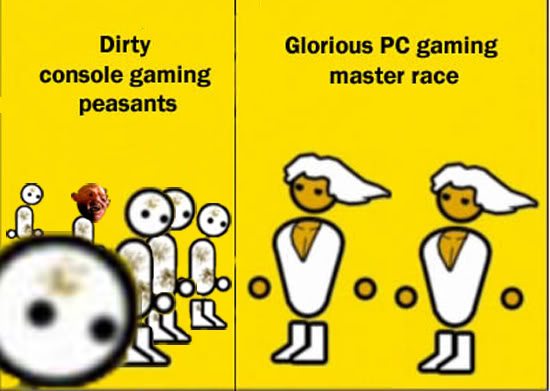 Once upon a time, Amazon UK allowed for users to vote for their favorite console of all time. According to “eight facts we learned from those entries”, the PC Master Race only missed the knock out cut by nine votes.

Confused? The PC Master Race is a commonly used term by heavy computer users, often claiming that the advances in computer technology outweigh that of consoles and referring to them as ‘peasants’. It is rumored that this term was first coined (or made popular by) well-known PC game reviewer “Yahtzee” from a series aptly named ‘Zero Punctuation‘, due to his fast talking nature. In this series he refers often to the ‘Glorious PC Master Race’ in his witty and informative gaming reviews – this is seen in the image above.

This information was provided to us through Reddit user LightninLew, courtesy of the /r/pcmasterrace subreddit. In the comment section, there’s the general slander for console gaming and it’s users – but as always an interesting appreciation for the of the older consoles, with one user stating “… I’m OK with this. PS2 was my childhood.” It’s an interesting loophole, whereas consoles such as the PS2, Nintendo 64 and SNES often seem to slip past the ‘console peasant’ stereotype. Could this be due to nostalgia?

Another user in the comment section defended the PS2 claim and likening it to the GameCube, claiming that “The PS2 and GameCube are what I at least consider the last “true” consoles – just plug in and play”. Further comments were made that due to the nature of PC’s being close to console architecture at that time, they’re exempt from the ‘peasant’ classification.