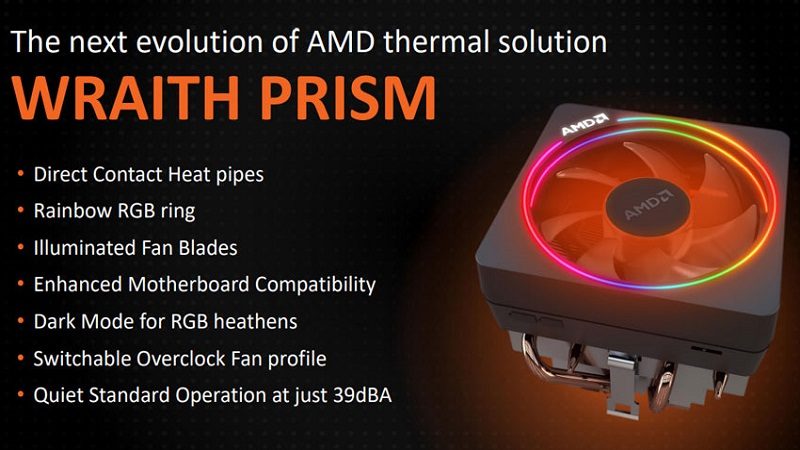 Every year or so, both Intel and AMD refresh their CPU and chipset lineups. What doesn’t usually change is the CPU coolers. Intel has stuck to the same design since Ivy Bridge which itself is only a bit different from the early Core days. AMD has been more active with their Wraith lineup of coolers. Together with the new Ryzen 2000 series, AMD is releasing a new Wraith Prism CPU cooler for sperate purchase. AMD first teased the offering at CES this year.

The new RGB LED is controllable with Ryzen Master software and features 2 LEDs. It is also compatible with motherboard vendors standards like ASUS Aura Sync, MSI Mystic Light, GIGABYTE RGB Fusion, BIOSTAR Vivid, and so forth. As a premium offering, it supports multiple fan profiles via Ryzen Master. Underneath the hood though, it is pretty much the same Wraith Prism from before. Given the minor changes, there will only be a small $5 premium over the $49 Wraith Max.

It is interesting to see AMD getting more involved in the cooling market. Intel, on the other hand, has been reducing their involvement in this market. I guess there is a market for people who want a complete AMD branded solution. It does make me wonder what AMD’s cooling partners feel about the increased competition. What would be funny is if someone made a bracket to use these AMD coolers with Intel chips.