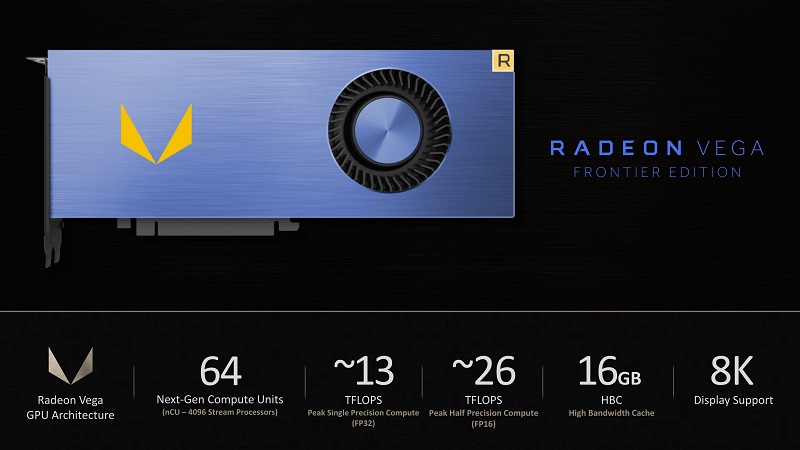 AMD will launch their Radeon Vega Frontier Edition graphics card later today. Before the launch, a few select publications were given the chance to preview the card in a closed environment. Unfortunately, AMD is keeping a tight ship over the performance data. However, AMD let loose some key details before launch. As expected AMD is targeting the Vega Frontier Edition at Nvidia Quadro and Titan Xp users.

Sort of like the Radeon Pro Duo before, AMD is targeting the low-end professional and high-end gamer market. The card is basically a semi-professional workstation card but with both gaming and professional driver support. There are two models which are identically specced except for the cooling. There is the $1200 US for the air cooled and $1800 US for the liquid cooled variant. The liquid cooled model features higher clock speeds due to the improved cooling. 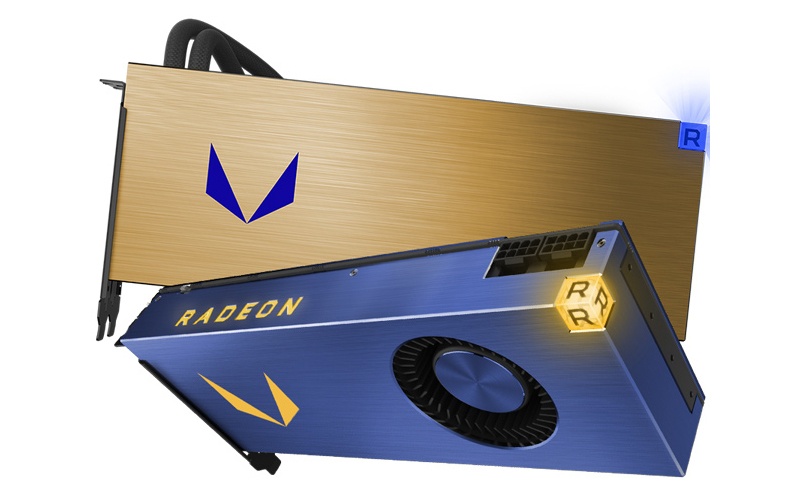 The Frontier Edition features 4096 stream processors clocked beyond 1550 MHz to deliver 13 TFLOPs of FP32 and 25 TFLOPs of FP16 compute performance. There’s also 16 GB of HBM2 VRAM which comes in two 8GB stacks. The graphics card has a total rated bandwidth of 480 GB/s which is lower than the 512 GB/s on Fiji. The air cooled model features up to 300W TDP while the liquid-cooled model features up to 375W.

Both cards feature a nice textured brushed aluminium shroud. The air cooled model is a very nice blue with a single blower type fan. The liquid cooled model is gold and comes with a liquid cooler of course. Both cards feature a coloured Vega and Radeon logo that is either gold or blue respectively. Hopefully, we will see the cards in action tomorrow and enough stock to meet demand. For those who just want to game, Vega should be just around the corner.