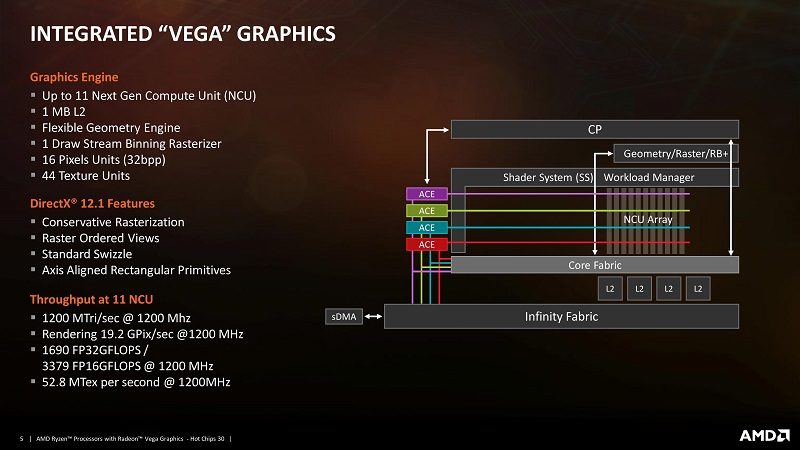 Earlier this year, AMD launched their long-awaited Raven Ridge APU. The new chips are a major step up for AMD with Zen based CPUs and Vega architecture GPUs. During the launch, we already learned a lot of the details for the new chips. However, AMD never really did a deep dive on the new design. At this year’s Hot Chips, the company is now detailing many of the optimizations they have done to Raven Ridge.

First up, due to the new Zen design, we have 4 cores and 8 threads for the CPU. The GPU portion is made up of 11 Vega CUs. Despite a 60% increase in transistor count, the chip is 16% smaller due to the new process node. Connecting all the chip components is Infinity Fabric which links all the various parts of the SoC together. Designed at the same time in 2013 and 2014 as Zen, the goal was to improve power and bandwidth efficiency. As a side note, by being so much more efficient, Zen is allowing a stronger GPU by freeing thermal headroom. 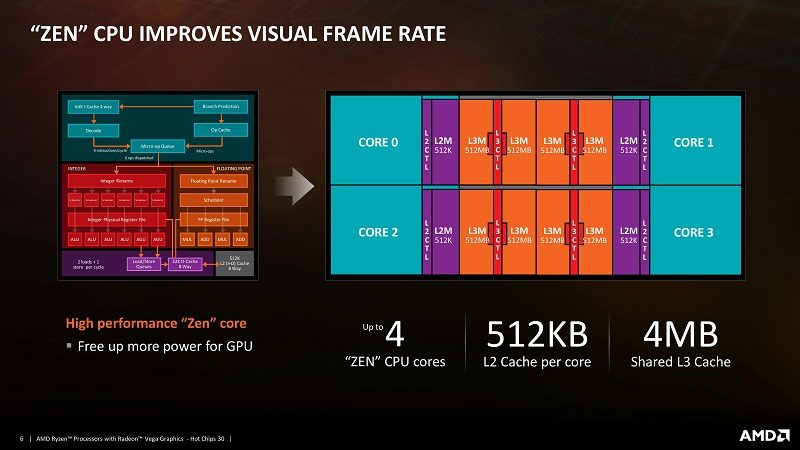 Due to the importance of the iGPU to the APU, a major priority was to improve memory performance but also efficiency. The biggest step AMD took to improve performance is to increase cache sizes and reduce memory latency. With Infinity Fabric, the chip can power gate various connections as required. This allows some connections such as GPU to RAM to run fast while others idle down. Finally, AMD implemented lossless compression like with GPUs and priority transport in Infinity Fabric.

Lastly, Raven Ridge is also making better use of thermal headroom. The additional on-die voltage regulator will help with better power gating of idle resources. This will allow a longer sustained period of high performance. Along with these improvements, AMD also revamped the video playback and codec support. Overall, the improvements make this the biggest jump for APUs since Carrizo in 2015. Overall, it looks like AMD has done a lot of work for Raven Ridge. It took some serious long-term planning but it is finally paying off. Hopefully, this will mean more OEMs will pick up APUs.