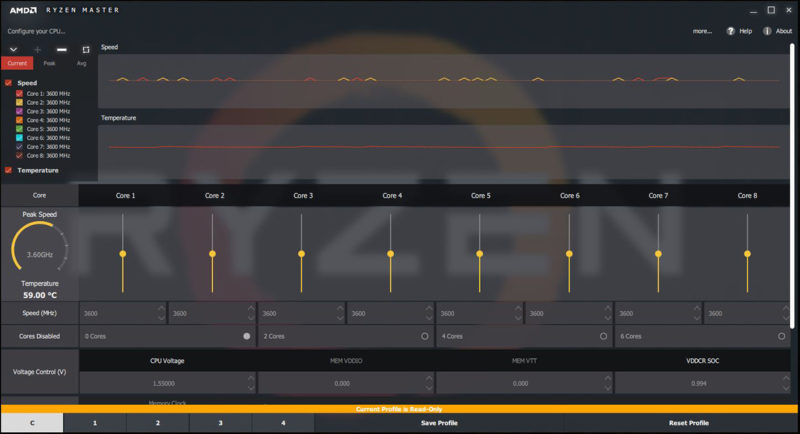 The latest update version 1.0.1 for AMD Ryzen Master overclocking software is finally going to start reporting the AMD Ryzen CPU temperatures more realistically than previous versions. Many users were annoyed that they were getting 60C to 70C degrees idle on their Ryzen 7 1800X, 1700X and 1700 CPUs but it turns out, the temperature was not being reported correctly due to the fact that it is using tCTL offset temperature for fan policy to get the temperature reading which is usually 20C degrees greater than true junction temp.

Explained by AMD from their Community Update on March 13:

The primary temperature reporting sensor of the AMD Ryzen™ processor is a sensor called “T Control,” or tCTL for short. The tCTL sensor is derived from the junction (Tj) temperature—the interface point between the die and heatspreader—but it may be offset on certain CPU models so that all models on the AM4 Platform have the same maximum tCTL value. This approach ensures that all AMD Ryzen™ processors have a consistent fan policy.

The updated Ryzen master software now reports the junction temperature as you can see in the sceenshot above with the Ryzen CPU under full-load but only hitting 59C when it would have reached 70C+ with the previous version. This should help more users gauge their cooling performance and tailor their voltage for overclocking. This Ryzen Master version 1.0.1 is not available yet but it will launch on April 11th, which is the same day the new Ryzen 5 CPU lineup will launch.