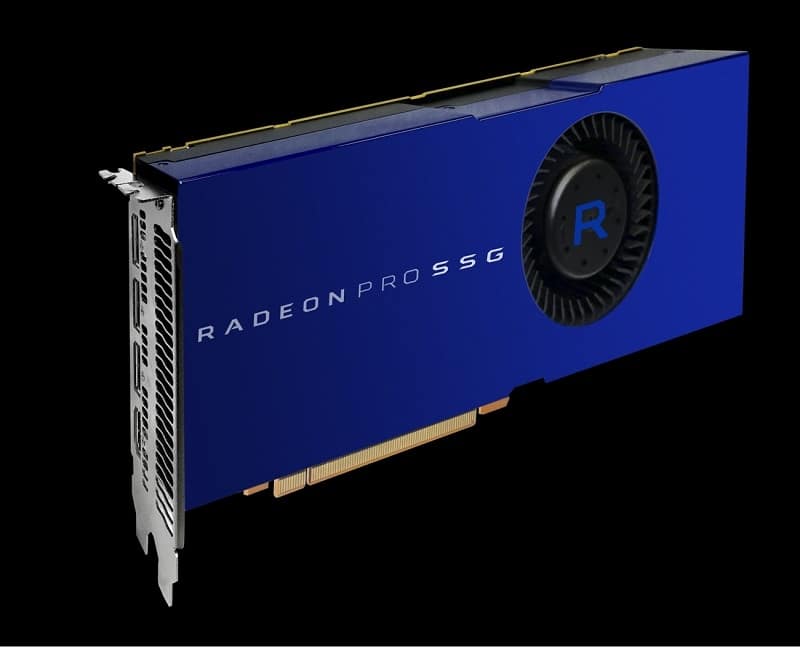 During today’s new Capsaicin event, AMD had a number of new things to show off, mostly on the professional side of things. One of the new graphics cards launched under the Radeon Pro banner is the intriguing Radeon Pro Solid State Graphics. While a new Polaris 10 workstation Radeon Pro card is nice, the surprising thing is the addition of several M.2 slots for adding NAND SSDs to the graphics card.

According to AMD, the Radeon Pro SSG features two M.2 slots for NAND SSDs for increasing the available memory on the GPU. With support for up to 1TB SSDs, the end goal is to get around the VRAM size limitation faced by most professional graphics cards. Even top end professional cards top out quite low and can run out of local cache memory for heavy workloads. By avoiding the run through the PCIe bus, access speed is vastly improved, though bandwidth is somewhat slower.

For now, the Radeon Pro SSG is still a beta product with full availability in 2017. However, interested developers can apply to buy a development kit right away. Be prepared to pay though as that’ll set you back $9,999 USD. What do you think about increasing VRAM size using SSDs? I for one look forward, to 3DXPoint SSD or DIMM powered graphics cards.