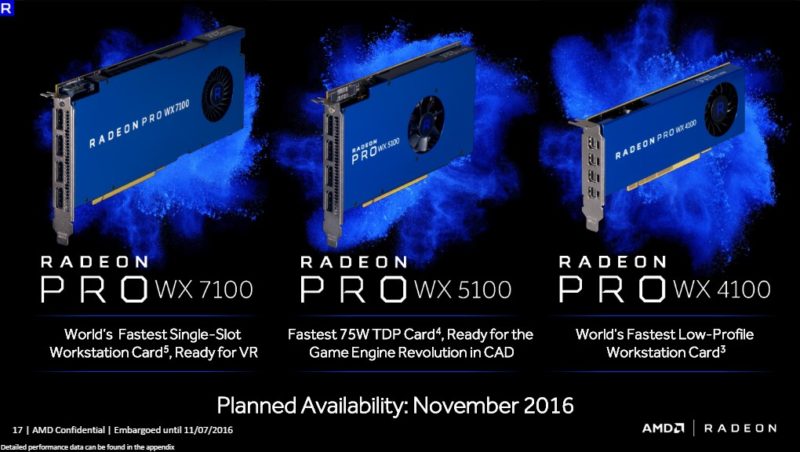 AMD has recently discussed their new enterprise line-up of products based on the Polaris architecture including the Radeon Pro WX 4100, WX 5100 and WX 7100. To coincide with this release, the company reaffirmed their commitment to releasing stable enterprise drivers which go beyond normal certification standards. As a result, the drivers are stress tested to be suitable for the most demanding situations and able to leverage impressive performance benefits over time.

More than anyone else, enterprise workstation graphics users need predictable software release dates so they can properly plan ahead. The Radeon Pro Software Enterprise Driver addresses this need with a commitment that updates will be released on the 4th Thursday of each quarter, starting today, with future releases planned on January 26th, April 27th, July 27th, and October 26th, 2017.

When it comes to stability improvements, the Radeon Pro Software Enterprise Driver 16.Q4 has been rigorously tested to help ensure rock-solid reliability. AMD’s extensive Radeon Pro Software test plan is over and above consumer testing and includes extended stress testing.

Radeon Pro Software is designed to provide an optimal user experience on leading workstation OEM platforms. We and our OEM partners thoroughly test this software to ensure it meets the demanding needs of enterprise users.

With this driver, you will see faster performance in PTC Creo, Siemens NX, and Dassault CATIA when you compare the 16.Q4 Enterprise Driver with last year’s AMD FirePro 14.502.1019 Driver.

It’s not just about raw performance either because Radeon Pro Software also enables outstanding productivity value. When tested against the Nvidia Quadro M2000, the AMD FirePro W5100 delivers up to 27% more productivity per dollar.

With DirectX 12 and Vulkan support, the Radeon Pro Software Enterprise Driver 16.Q4 may be used for the coming real-time game engine professional workflow revolution. Game engines such as Unreal Engine and Unity are being used by professionals for real-time previz storyboarding, CAD visualization and Building Information Modeling (BIM).

There is also WHQL support for Windows 10 Anniversary Update and Windows 10 Device Guard, that enables users to lock down applications that are trusted on the device, helping increase protection from malware.

The introduction of Radeon Pro Software continues AMD’s commitment to providing all levels of workstation graphics users with high-performance and stable certified professional software. This commitment includes the Radeon Pro Software Enterprise Driver which incorporates new features, performance and stability improvements, and prioritized support designed to make enterprises and their users more productive – all delivered on a predictable schedule.