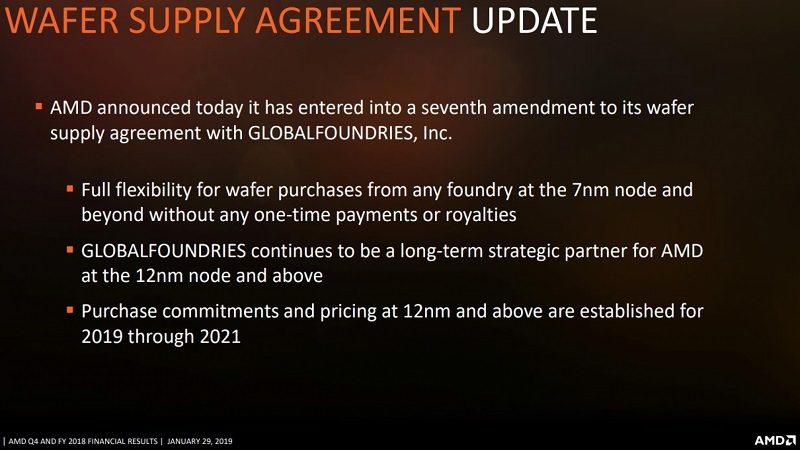 In their latest Q4 2018 earnings report, AMD provided a number of updates for the company. One of the ongoing issues is the Wafer Supply Agreement with GlobalFoundries. The two firms have a long history between the two of them that stretches back to when the fabs were a part of the firm. As part of the Q4 update, the company has announced an update to the WSA to avoid some penalties for 7nm.

Due to the spin-off of GlobalFoundries, the company no longer had any fabs. To secure a relationship and deal with the fab, the company committed itself to buy chips from them. It also included some penalties if they did not purchase enough chips or they purchased chips from another fab like TSMC. For AMD, the company was able to secure preferential pricing at a point when their finances were not good.

Now, however, the situation has shifted a lot. GlobalFoundries has abandoned 7nm for now while AMD is moving onto 7nm for GPUs like Radeon VII Vega 2 and Zen 2 CPUs. In order to avoid paying a penalty when buying 7nm chips from say, TSMC, the company had to amend the agreement. Since GlobalFoundries can’t offer 7nm right now, the company was amenable to change. AMD can now go to any fab they want to get 7nm chips.