AMD Will Enter the Tablet Market in 2015 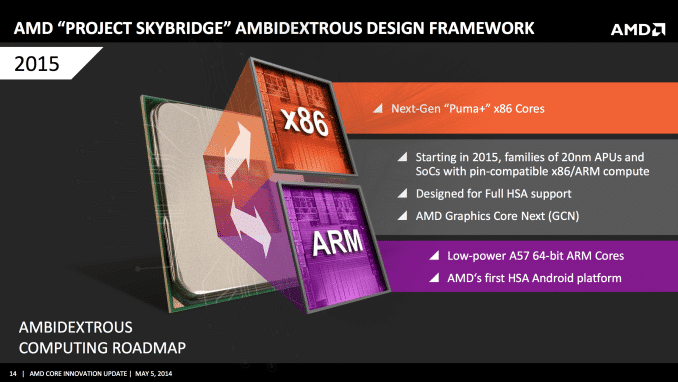 While Intel is getting their Cherry Trail SoC ready, AMD is hot on their tails and ready to enter the tablet market next year, and they’ll be doing so with a duality of chips. The first is the Nolan, an x86 SoC that will be made for Android and Windows tablets where the Amur is the ARM based variant designed for Android and Linux applications. While the leak only mentions the Amur this time, the information is just as applicable for the Nolan variant; these two SoC will be the first 20 nm APUs.

AMD’s Amur SoC is based upon the Cortex A57 and will feature 4 cores. Its graphics will be powered by Graphic Core Next 2.0. Nolan on the other hand is based on the Puma+ architecture and will be virtually identical to its ARM counterpart apart from the fact that it is x86 and not ARM. With this kind of graphical power on board, the only real known rival is the Tegra K1 and it will be interesting to see how AMD competes.

The shipping date of these chips is said to be in the third quarter of 2015. This is a tough market to enter for AMD, as we’ve seen Intel having difficulties with players such as Qualcomm and Media Tek in a market that has been in a steady decline since last year. It might also be worth mentioning here that we’ve previously heard that AMD may skip the 20 nm process all together and go straight to the 16nm, but listening to these latest leaks it looks like that rumour was false; at least as far as the tablet sector is concerned.

Thank you wccftech for providing us with these information