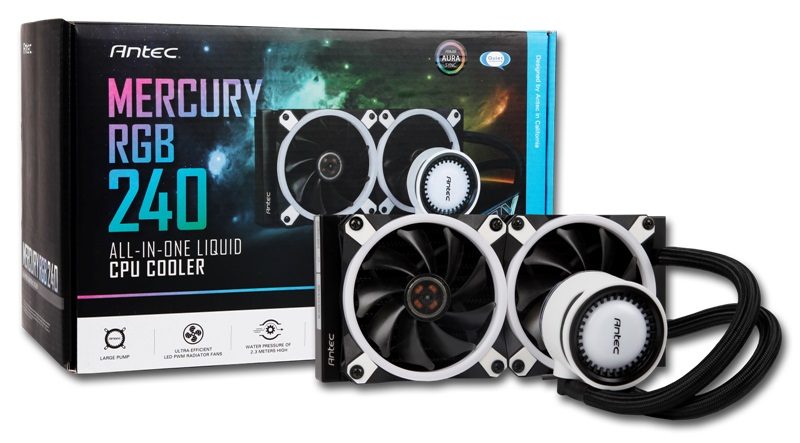 With the Mercury range, Antec doesn’t have many products on offer to choose from when it comes to cooling. What it does have though, tends to be excellent. Although not the first name you would think of when it comes to CPU coolers, they are slowly but surely attempting to carve themselves a slice of the AIO pie.

This is a somewhat unusual situation for us here at eTeknix as we have also reviewed the original Mercury 240 cooler. In that instance, we were impressed with the cooler. You might, however, be wondering if there are any differences. Well, yes there are. Wouldn’t be much point reviewing it again if there wasn’t.

So what differences are on show? Well, firstly, on this version Antec have largely ditched the 3-tone LED lighting for a full-blown RGB system. Antec also says that the new Mercury RGB 240 also includes several key product improvements which should help improve noise levels in addition to the overall performance.

It’s not often we get to do this, but we do have a direct comparison with the prior model so when it comes to testing, we can see how true this is. As such you will probably see me making a lot of references to the prior model throughout this review.

Let us, therefore, take a look at the Antec Mercury RGB 240 and see if this latest version with the RGB bells and whistles is a new contender in the cooling market.

At present, this product does not have an official store page, that, however, may have changed by the time you read this. As such, to check for further details we recommend visiting the official Antec website in the link here. 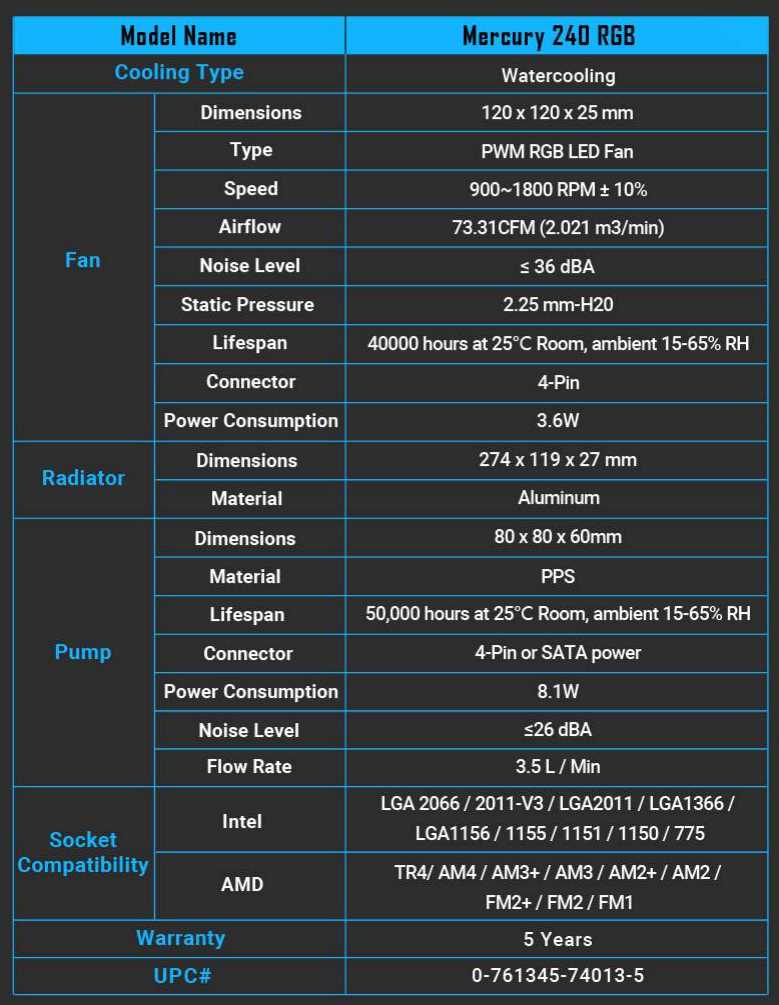 Unlike the original Mercury 240, Antec has pushed out the boat in terms of colors on the front packaging. While the themes remain largely in keeping with what we’ve seen from the company, with the RBG lights adding more visual bang to the products, it’s been transplanted onto the box as well. As always with Antec, the front of the box has everything you would want to know at a glance. It includes a nice clear image of the product, the key features while also highlighting the RGB within the text and color pallet range. 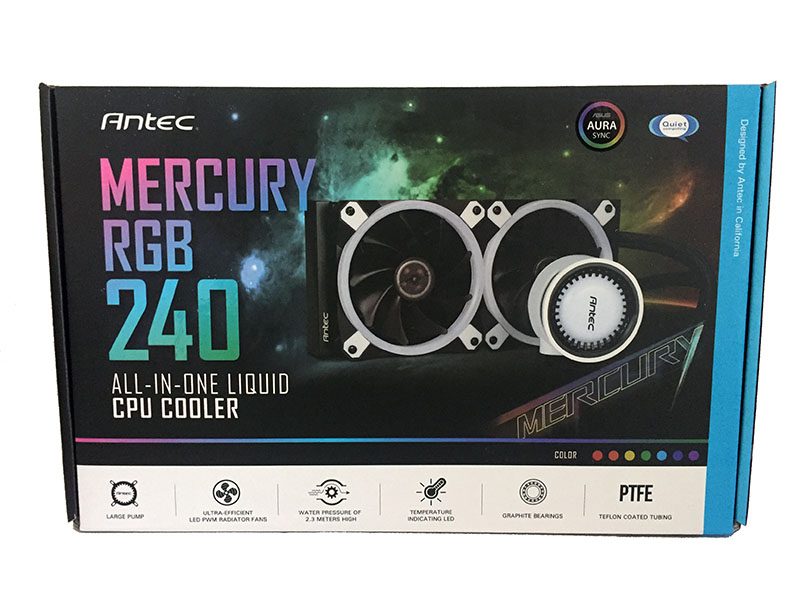 The back of the box is absolutely swamped with information. This is to accommodate the 9 languages displayed. This isn’t the first time I’ve made this point, but while I understand the commercial sense in making a product as legible in as many countries as possible, this wall of writing is hardly visually appealing. There are no diagram specifications of the product. Nor indeed anything to try and tempt us into the sell. The technical specification does tell you the bones of what you want, it would just be nice is Antec could put a little meat on them with some images. 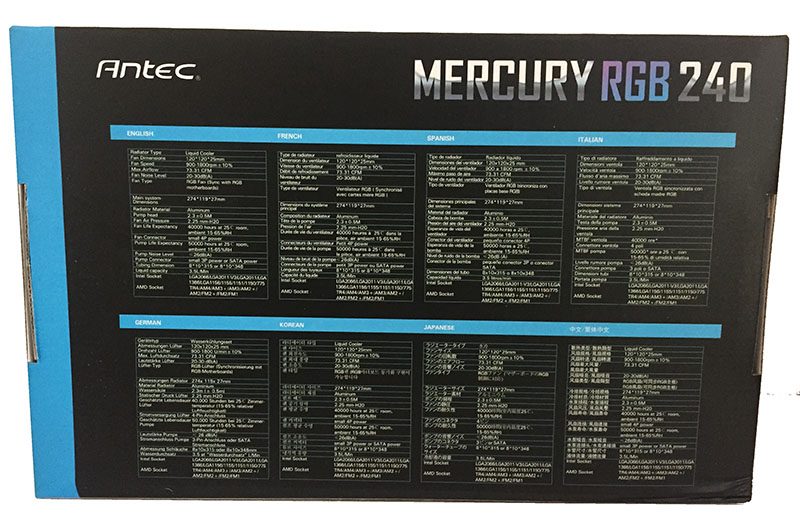 While the interior packaging of the Mercury series has remained largely unchanged, the Antec Mercury RGB 240 is a little more impressive. As always, everything has a place in the box and is well organized. There is a little slash in some parts of the box which do allow for a little rattling, but with everything in individually wrapped packages, any stress with the unboxing can be reduced and more importantly, you can keep things nicely arranged to help your installation. 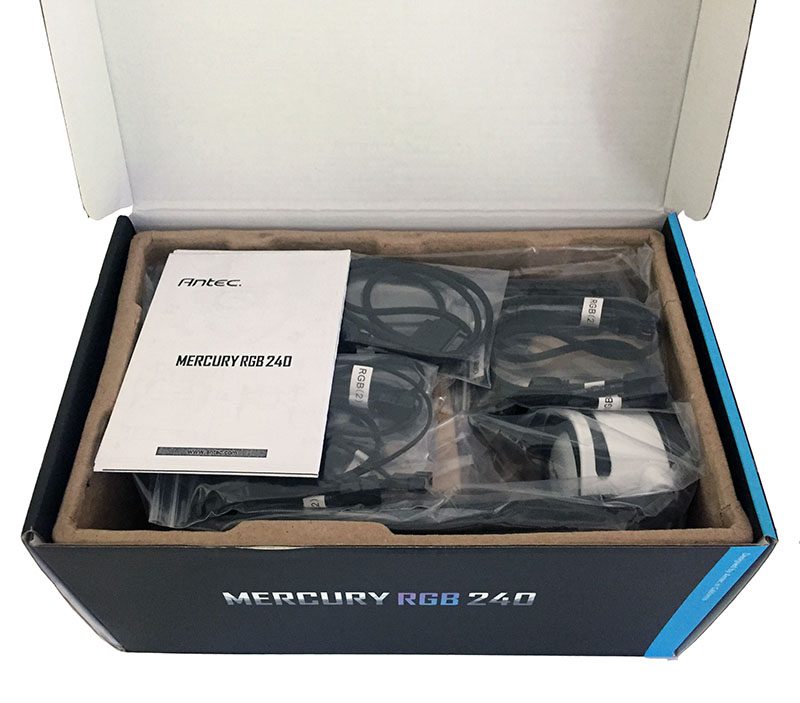 As above all the components are individually wrapped and Antec has even taken the nice step of labeling all the bags. As this is an RGB cooler with sync capability there are clearly a lot of cables. Despite this though, the way they are presented should help you make sure you use the right ones in the right place. It’s not foolproof, but it’s as close as you can make it in an RGB system. 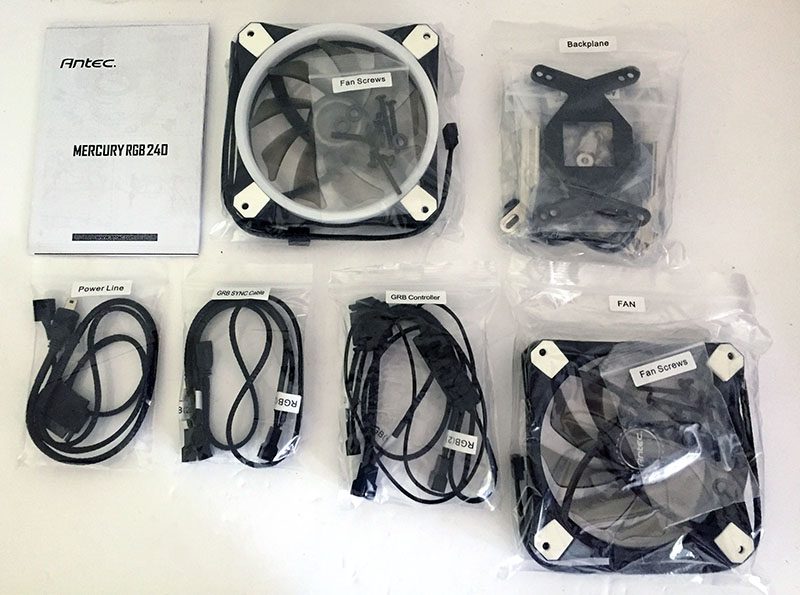 When everything is unpacked, you will note that you have a fair number of parts, but overall it isn’t too intimidating. We have certainly seen other coolers with far more of them and as Antec has a decent history for mounting brackets, nothing should be too difficult. 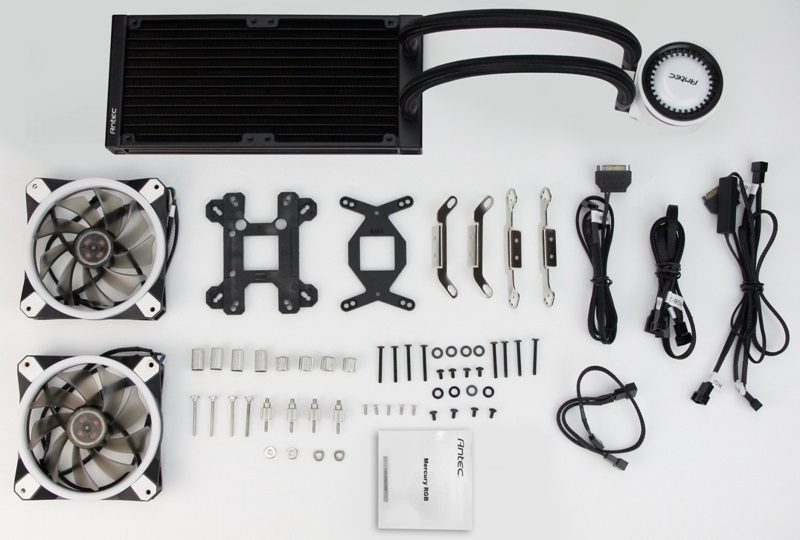