Harry Down / 6 years ago

Out of seemingly nowhere, Apple has now released a new official dock that is compatible with the Apple’s most recent “Lightning” connector.

Named the “Lightning Dock”, it was released silently through their online store today (19th May) – priced at £35 – and is the first first-party Lightning compatible dock that has been released by Apple. The product has an incredibly minimalistic, rounded design – making it the perfect size for any desk space or anywhere else you might find use for it. Previously, to indulge in the convenience of vertical charging with the iPhone 5/6 you would have to go and buy a third-party product, and while most are certainly commendable, you can’t always rely on them to provide the same integrity or aesthetics – which is often top priority for some iPhone users. We first saw Lightning come out in 2012, as a replacement of the old 30 pin connector. Being 80% smaller than the former connector, Lightning only uses a total of 8 pins and can be inserted either way up.

As well as charging you device, the dock will also sync the device to your computer when the dock connected via the USB, allow you to enjoy “clear audio during speakerphone calls” and can even play music when you connect it a powered stereo system, although the 3.5mm cable is sold separately. 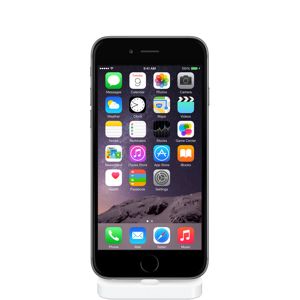 With such a sleek look, there is no doubt that every Apple enthusiast will want to get their hands on one.