Apple Vs Android -iPhone 6 is Just an Old Nexus 4? 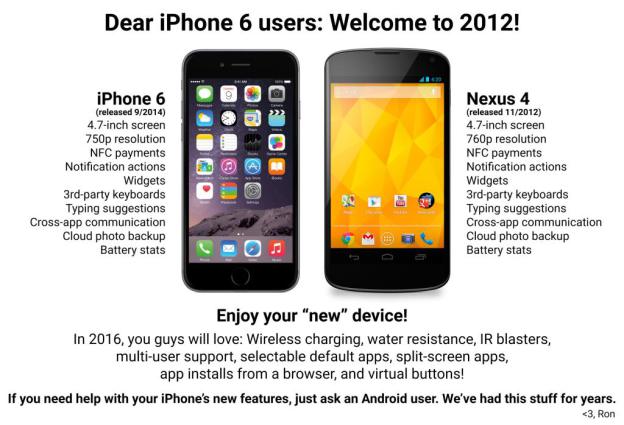 The Apple Vs Android argument will be ongoing until the end of time – Apple fans often claiming that the iPhone ‘just works’ and Android fans claiming of the latest technology and lowest prices. Both parties have good points, but are you paying way too much for your iPhone with possibly outdated technology?

The comparison shot above has been circulating around popular image boards and social media websites as of late, showcasing how Apple’s brand new iPhone 6’s premium features match that of something released almost two years ago by Google.

One thing this image doesn’t list however is the backend specifications of the phone, meaning there is no RAM or CPU model or speed noted, without taking this into account however this begs the question – is the iPhone really worth the price tag? But to put it into context, Googles Nexus 4 contains a Qualcomm Snapdragon S4 Pro and 2GB of internal RAM compared to Apple’s iPhone 6 with a faster 64-bit, A8 CPU but smaller 1GB of RAM.

Personally, I’m not a fanboy either way – but it does make you stop and think. Are you upgrading to the new iPhone 6? We want to know why you prefer Apple’s product over its competitors – is it the interface, are you happier with their design? Or maybe something else has got you hooked.