We are just a couple weeks away from the release of the latest AMD Radeon VII graphics card. As such, we’re very shortly going to find out exactly how good (or bad) these really are and, more specifically, just how they stack up against Nvidia’s 20XX series. Early indications (from AMD released benchmarks) would seem to suggest a near 2080 experience. Given that it’s going to reveal for essentially the same amount of money and not include ray tracing or DLSS, we would certainly hope so.

There has, however, been a number of questions raised stock level issues. Specifically, that AMD’s relatively late development of the card may have prevented any further designs (other than the reference) being available at launch.

In a report via Videocardz, however, images of the ASRock Radeon VII have appeared. Technically, however, despite it being under the ASRock name, many believe that this is still a reference model. 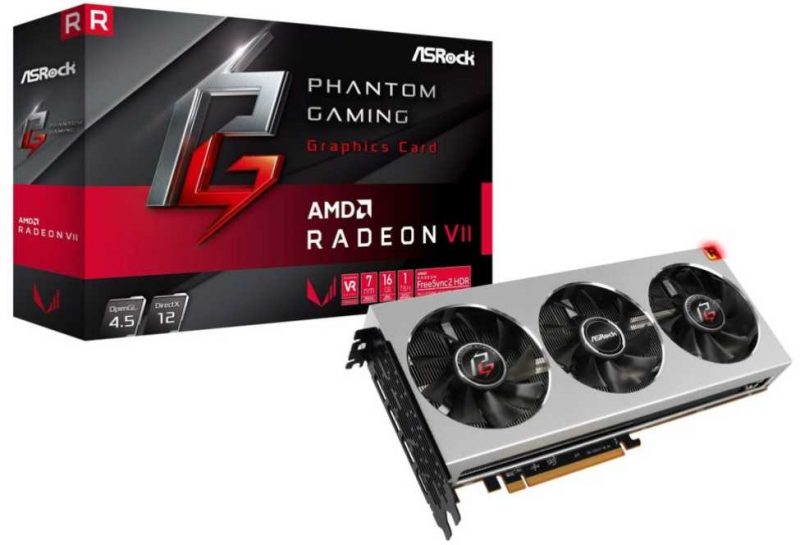 In terms of the packaging, it does at least confirm a few bits of news. For example;

In terms of the model itself, however, it is believed that this will feature practically no (or at least very little) modifications to the AMD reference model except for the added stickers and aesthetics. In other words, this is essentially a rebranded reference. If that is the case, then we shouldn’t expect to see this perform any better (at least out of the box) than the standard model. Admittedly, ASRock might look to tweak something with their overclocking software, but essentially I think the main point is not to buy this expecting it to be an immediate improvement.

The Radeon VII is set to officially release on February 7th. Any ‘custom’ models, at least ones which have truly seen alternations/improvements are not expected for at least another 4-8 weeks. We can’t wait, however, to see what that brings!

What do you think? Are you interested in this graphics card? Do you think the Radeon VII will impress? In addition, do you think it’s price is a problem?- Let us know in the comments!