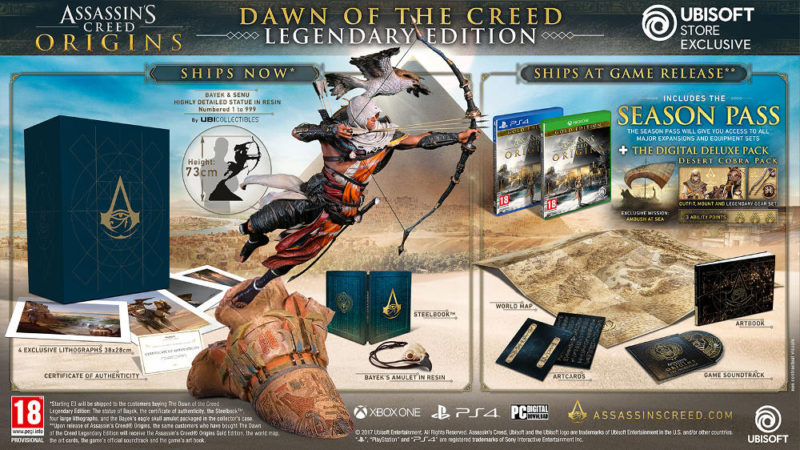 We have seen a lot of crazy collectors editions from Ubisoft, but Assassin’s Creed Origins Legendary Dawn of the Creed Edition takes the crown. The asking price: €800. In return, you get one of 999 numbered 73cm Bayek & Senu figurine in resin.

Other bonuses include Bayek’s eagle skull amulet in resin, two original art cards, steel book, a world map, four large lithographs, and the soundtrack. You’ll naturally also get the full game, the deluxe pack, and the season pass. A lot of content, that’s for sure, but it’s also a heavy price.

Normal Dawn of the Creed Edition

The normal Dawn of the Creed Edition features almost the same as the Legendary edition. It comes with the same figurine but in a smaller 37cm version. The resin skull amulet has also been replaced with a non-resin version. The rest is the same, but the price is a lot friendlier. This version can be yours for €149.99. 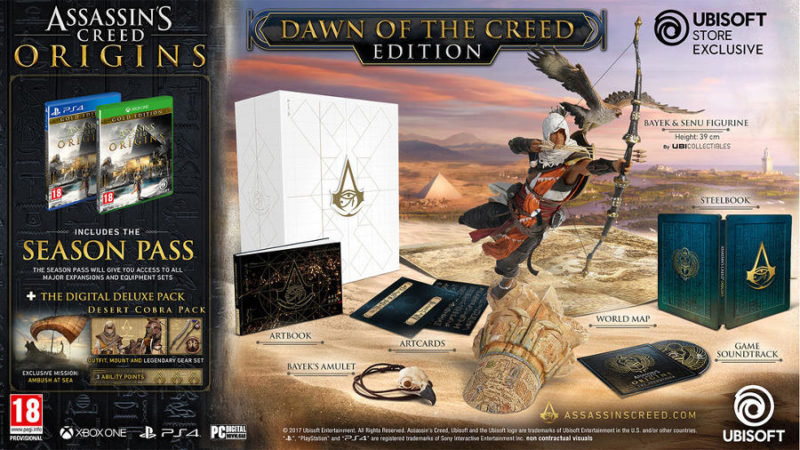 The standard edition is only the game for €59.99 while the deluxe edition adds a physical world map and the official soundtrack. The deluxe pack also includes an exclusive mission at sea and the desert cobra pack with outfit and equipment parts.

The Gold edition features the deluxe pack and the season pass, but not the soundtrack and world map. The Deluxe Edition is €69.99 and the Gold Edition is €89.99. 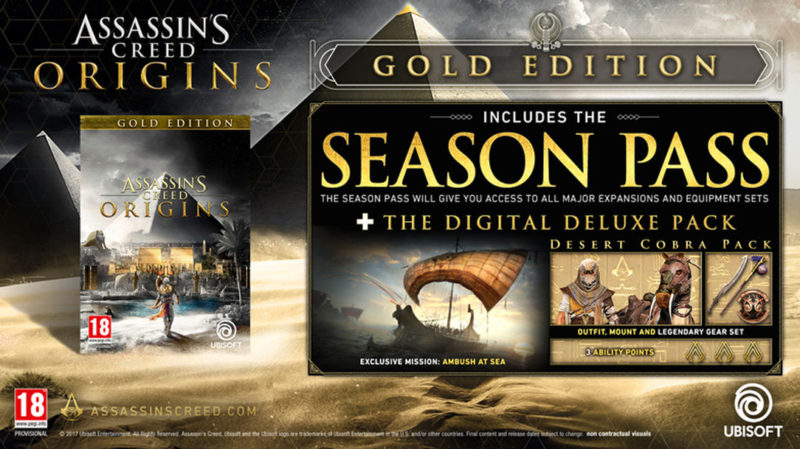 The last version is the God’s Edition which seems the most moderate when comparing price with the included content. You get the full game and deluxe pack, but not the season pass. Instead, you get the world map, the soundtrack, a book with game art, and a 27cm figurine. This pack will cost you €109.99.

Ubisoft is no stranger to a lot of game editions and like it has been in the past, it’s difficult to get everything in one pack. Sure, you could get the €800 edition, but that’s just insane. The God’s Edition seems great, but it lacks the season pass. There is, of course, the normal Dawn of the Creed Edition, but that’s still €150. A lot of money for one game. The Deluxe and Gold Editions should also just have been a single version with the perks from both combined. It all seems a bit like a swing and a miss to me.

You can browse all the editions in full in the official Ubisoft Store.