Following my recent look at one of Asus’ mainstream boards, the P8Z77-V which saw me highly impressed with its feature pack and relatively competitive levels of performance that give some of the higher end board a run for their money, its time to see what else is available in Asus’ mainstream motherboard line-up.

When it comes to needing a new motherboard, not every user needs a top end board and for any manufacturer, targeting the mainstream market with a top end board is a worthless exercise. This is the whole reason why there are product ranges that stem from the rock bottom basic board right up to the top end ROG boards (in Asus’ case) that give every bell and whistle possible to cover every eventuality. Sticking more with the mainstream market though, like we have seen recently with the launch of the 7790, there are a few gaps the are still to be filled in, either of feature sets or price point and in the case of the Asus mainstream line up, this is between the P8Z77-V LX and P8Z77-V.

The P8Z77-V LK offers up the best of both worlds between the entry level and mid range boards and this is both in terms of price and performance. Over the entry level board, we see mre USB3.0 connectivity on the rear I/O along with a DisplayPort output, 7.1ch audio, three PCIe 16x lanes giving the option for up to three way graphics configurations should the need arise and cooling to some of the power phases around the CPU amongst more subtle features. Obviously this is not a high up the ladder as the P8Z77-V so items such as on-board WiFi is not present, but this is the whole point of a board that with in the middle, it offers up the best of both worlds for a certain price point. 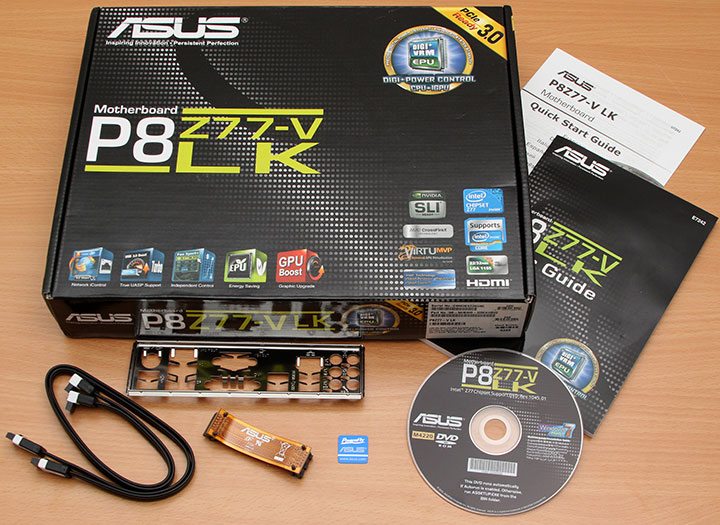 Still being effectively a entry to mid level board, there is not the biggest range of accessories included but there are all the basics to get you going including a driver CD, SATA cables, I/O shield and even a SLI bridge as well.