The ASUS Sabertooth Z170 S is one of the most ambitious visual designs I’ve encountered and prioritizes a military theme much more than its predecessor. Instead of covering the entire PCB with thermal armour, ASUS have decided to only employ this plastic section around the rear I/O. Personally, I prefer the Z97 Sabertooth Mark S’ stealthier appearance and subtle camouflage. Of course, this greatly depends on your own personal tastes, and I’m sure the striking theme will appeal to many users. As someone who loves white components, it’s easy to admire the PCB and I have to credit ASUS for trying to release something which is undeniably unique.

On a more positive note, the chokes’ heatsink looks absolutely stunning and I’m in awe of the chrome finish. Additionally, it contrasts superbly with the motherboard’s power design and demonstrates a high level of careful planning. In terms of the overall layout, there’s six 4-pin chassis fan headers, a CPU fan header, and CPU optional header. These are positioned to allow for very tidy cable management and makes it simple to install water cooling hardware. This lends itself to extreme usage scenarios rather well but I’m slightly perplexed by the lack of an LED post readout. This helps during system diagnostics especially when the CPU is being overclocked. Another improvement could be to reinforce the primary PCI-E slot with some stainless steel shielding. This small change should compliment the white theme and prevent GPU droop. 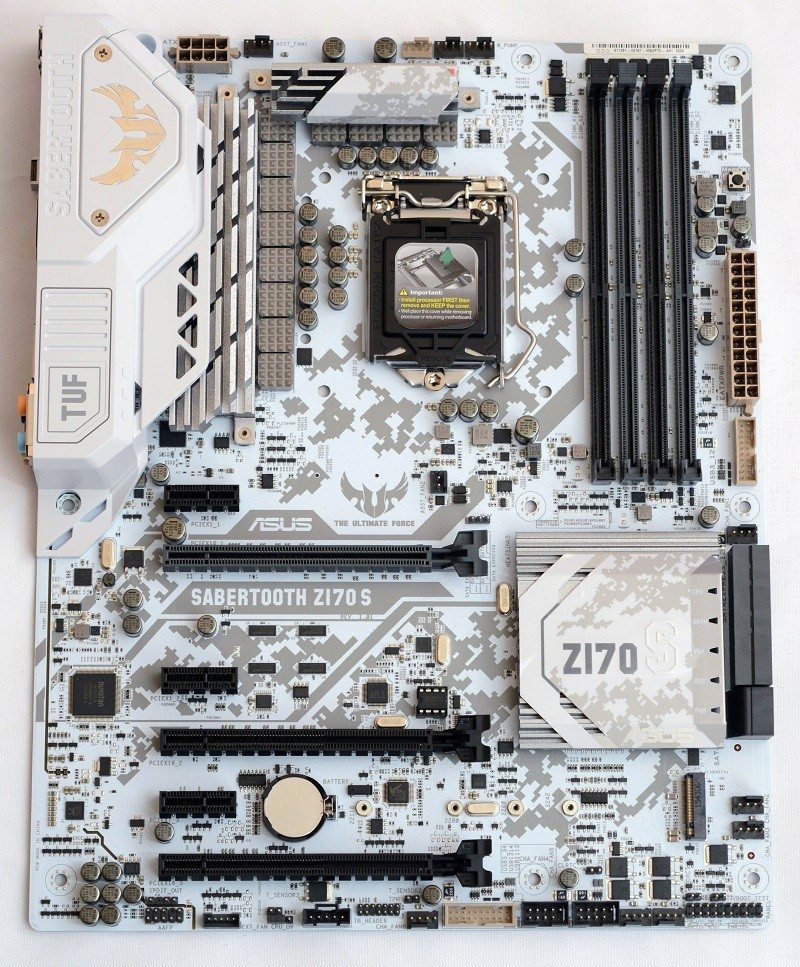 As you might expect, the motherboard utilizes a premium 8+4 power design and TUF alloy chokes which operate 13.6 percent cooler than traditional options. Furthermore, the TUF capacitors are rated to 10K and have a thermal threshold between -70C to 125C. This is a 20 percent improvement compared to standard caps which feature a range of -55C to 50C. ASUS TUF black metallic caps are characterized by a lifespan of 10,000 hours and shouldn’t experience any reliability problems over time. On another note, the TUF MOSFETs feature a lower RDS meaning the switching resistance is reduced.

ASUS’ DIGI+ VRM is able provide reliable constant voltage and maximize the potential of your CPU. The ASUS PRO Clock and TurboV Processing Unit allows for overclocked base frequencies up to 400MHz. This is possible due to the incredible amount of options at your disposal to find the BCLK and core frequency limits. 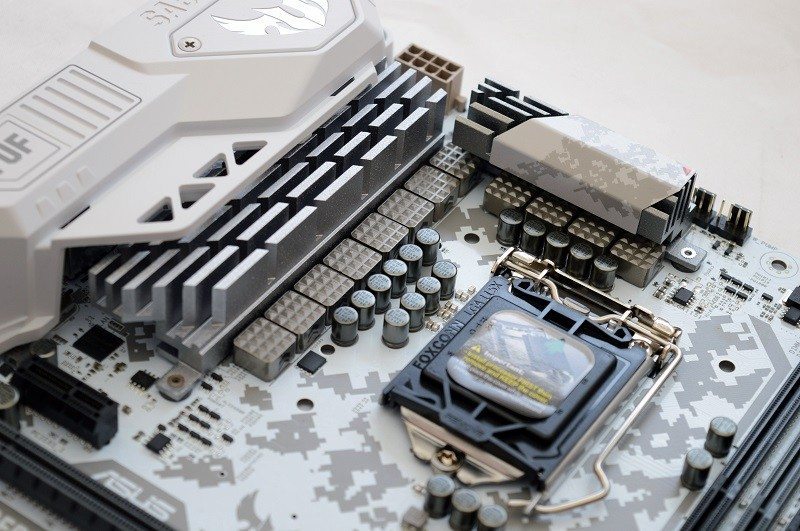 Here we can see the ASUS Sabertooth Z170 S branding which surrounds the first PCI-E x16 slot. This is implemented in a really clever way and identifies the product without being overbearing. 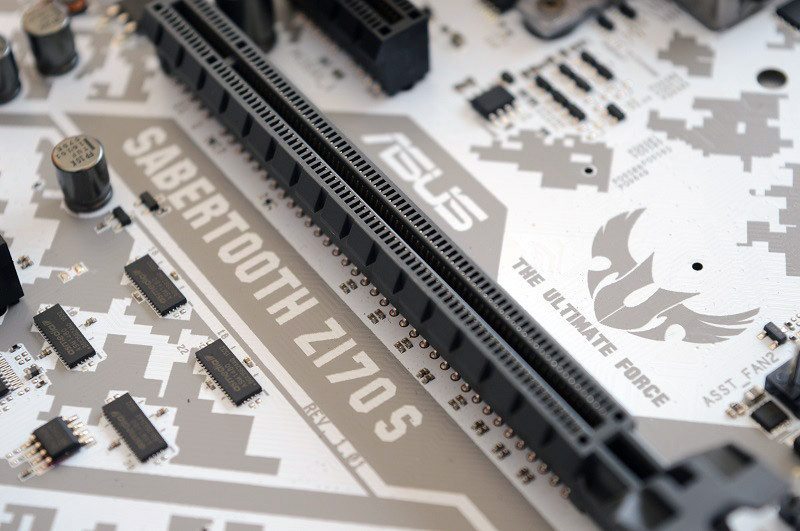 In terms of memory support, the motherboard can accommodate up to 64GB with speeds reaching a staggering 3800MHz (OC). Of course, most users will dial in an XMP profile and focus on CPU overclocking. Near the DIMM slots, there’s a MEMOK! button to check stability and the 24-pin ATX connector is in its optimal position. Adjacent to that, there’s a USB 3.0 and 4-pin fan header. Ideally, I’d prefer to see a right-handed USB 3.0 header to create a cleaner finish. However, motherboard manufacturers often select the traditional top down approach due to chassis restrictions. 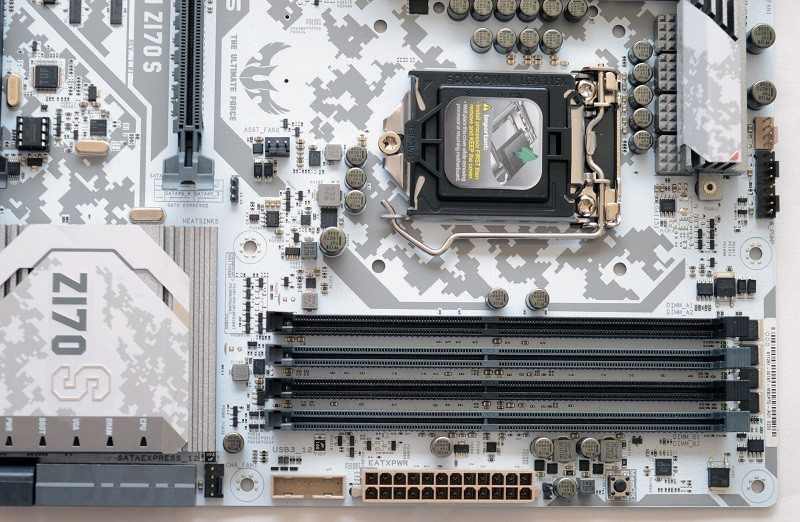 The TUF audio solution is based on Realtek’s ALC1150 codec and opts for shielding to dramatically reduce multi-lateral interference. Furthermore, this maintains a greater precision between analog and digital separation. The audio section utilizes a de-op circuit and individual layers which divide both audio channels. There’s isolation between the audio segment and main PCB as well as an integrated amplifier. 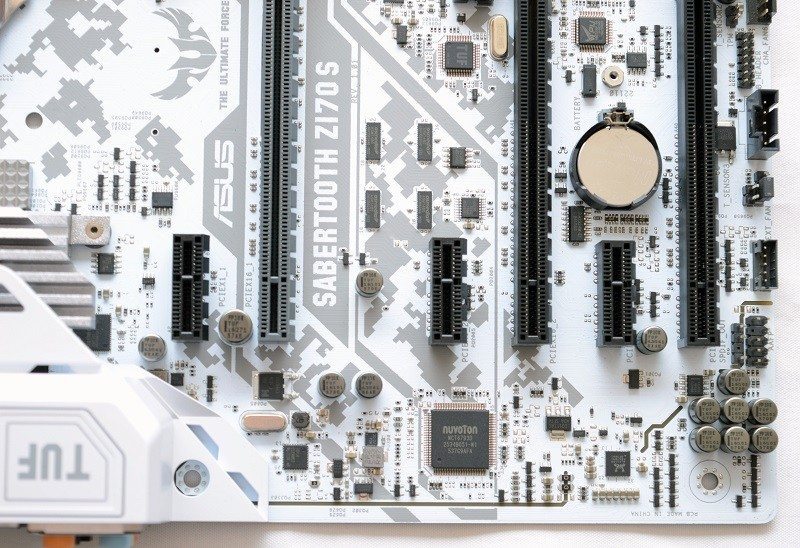 Another interesting addition is the QLED indicator which displays information about key system components during the boot process. LEDs for the CPU, DRAM, VGA, Boot and Power flash to help you source any problems if your PC fails to post. In terms of storage options, the motherboard houses six SATA 6Gb/s ports, two SATA Express 10Gb/s ports, and a 32Gb/s M.2 connector. The PCI-E layout is capable of powering 2-way SLI and 3-way Crossfire configurations. 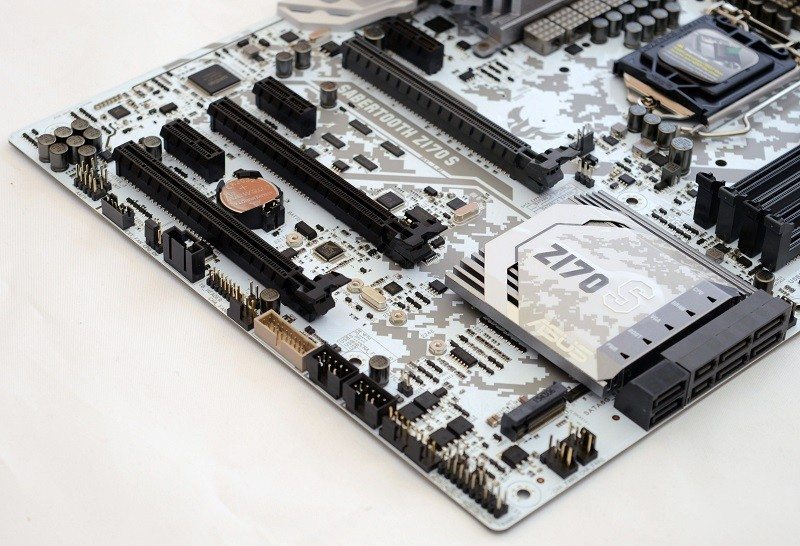 On the opposite side of the motherboard, there’s a retro inspired 8-bit design which looks fairly spectacular. 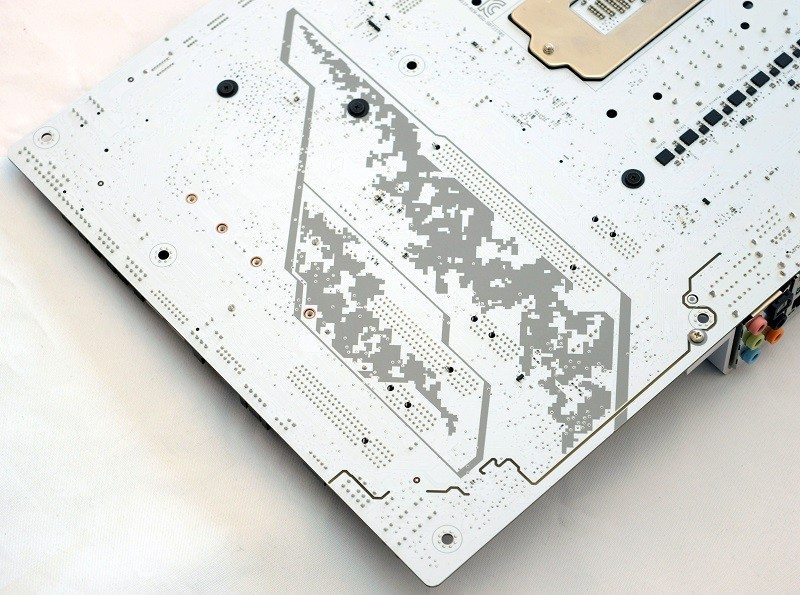 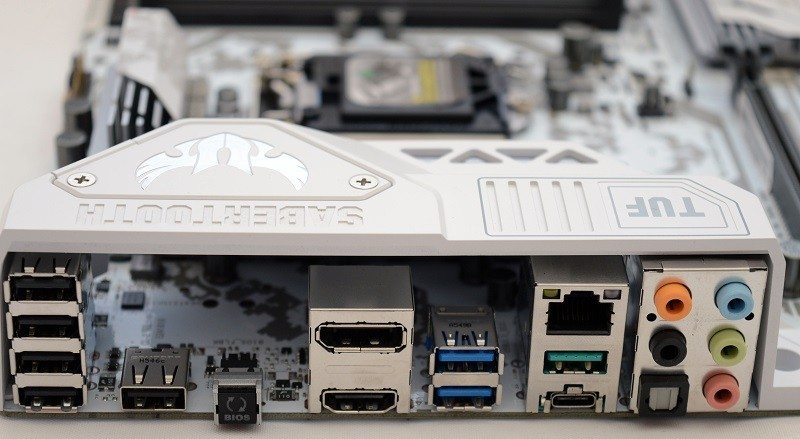