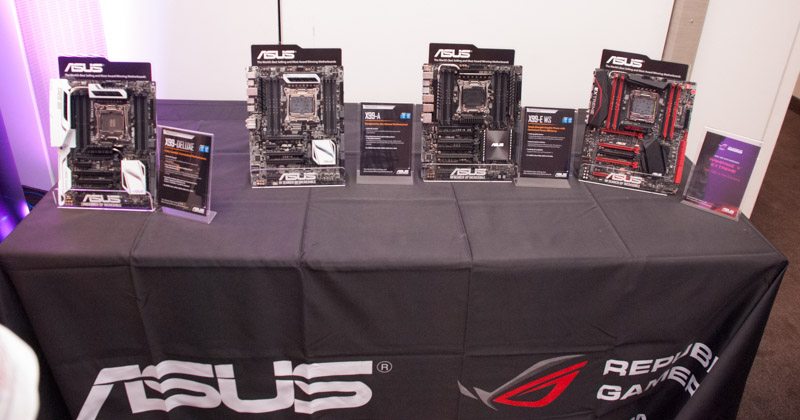 The run-up to the launch of Intel’s new X99 chipset has been very similar to that of Z97 in that nothing has been kept a secret. Everything about the new chipset, the new CPUs and the different motherboards vendors will produce has been exposed to the press in recent weeks. However, ASUS have been one of the vendors who have done a fairly good job at keeping a lid on things: leaks from the ASUS camp have been few and far between. Yet launch day is finally here so we can share all about the new ASUS X99 motherboards. We were invited to attend an ASUS X99 technical seminar in London where ASUS revealed their X99 line-up which consisted of four motherboards. These four motherboards will be the initial offerings from ASUS at launch but we may see other models launch a little later down the line. On show were three ASUS X99 motherboards that will be part of their Channel Series and a solitary motherboard from the Republic of Gamers series – the hotly anticipated Rampage V Extreme. Interestingly, the release of the ASUS Rampage V Extreme motherboard means we will probably not see an Extreme SKU on the Z97 chipset but that’s a story for later on, first let’s dive into each of the motherboards shown off by ASUS and then take a look at some of the new features ASUS are bringing to the market with their X99 motherboards.

As is always the case with ASUS motherboards of recent generations the “A” moniker denotes the entry level variant. It is possible that we may see better (and worse) motherboards released by ASUS in the future but generally speaking the A model is the baseline for what we should expect of ASUS X99. As you can see this baseline motherboard is still high-end – let’s face it there’s no way an X99 platform couldn’t be. The ASUS X99-A comes with the new ASUS OC Socket, support for up to 64GB of DDR4 memory and it adds the ASUS 5-Way optimisation technology that we saw introduced with Z97. We will discuss in more depth shortly what the ASUS OC Socket and 5-Way Optimisation entail, but there is a lot more to it than just marketing speak. 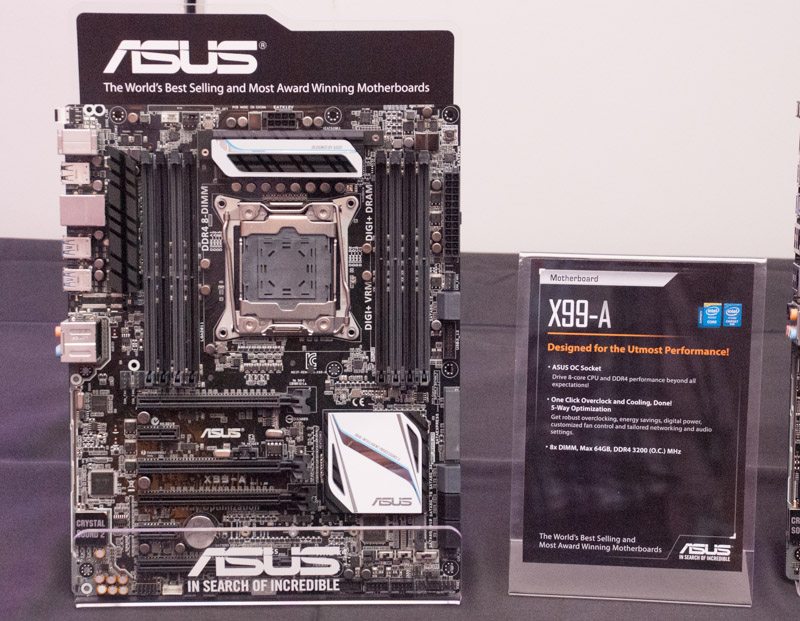 Next up in the channel series is the DELUXE model. This is the flagship ASUS motherboard for consumer-targeted connectivity. The noteworthy features include triple band 802.11 AC WiFi and Hyper M.2 which is a standard of M.2 that provides 32 Gbps instead of the usual 10 Gbps. ASUS have also added a unique fan accessory daughterboard which allows you to connect and control additional fans and you can control these with all the features of the latest ASUS Fan Xpert 3 utility, we’ll detail this more a bit later. 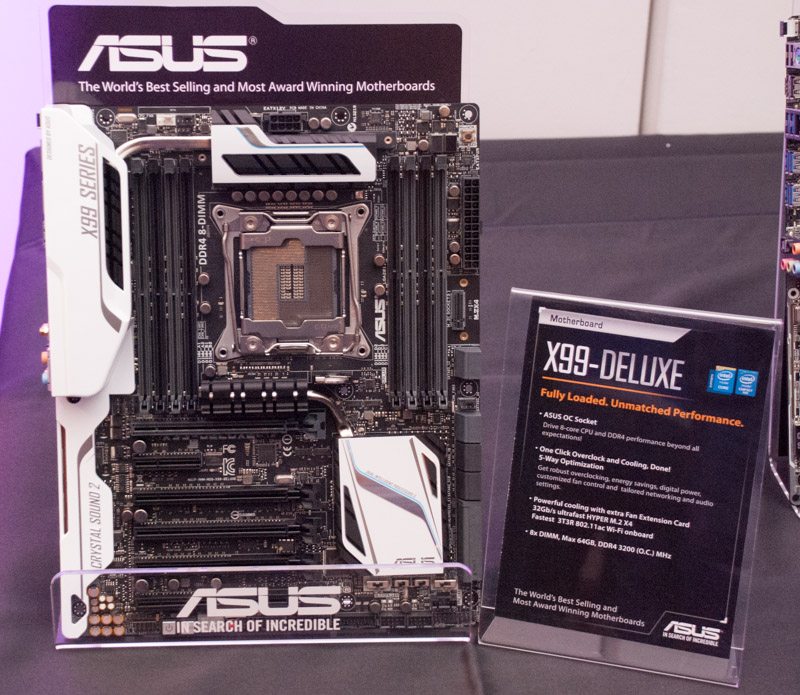 The ASUS X99-E WS motherboard is the main Workstation board to launch and this quite obviously brings with it an overall feature-set and range of connectivity that is higher than the DELUXE model. As we’ve seen in the past this will be matched by the price, but the target market for this kind of product is prosumers and working professionals so the premium is assumed as justified. The headline feature of the X99-E WS is that it supports 4 Way SLI and CrossFire and has abundant connectivity including M.2, SATA Express and Thunderbolt 2. ASUS have also kitted out the power delivery with their highest end components such as 12K rated capacitors which enhances the stability and reliability of the platform: a crucial consideration for a workstation where time is money, avoiding downtime is vital. 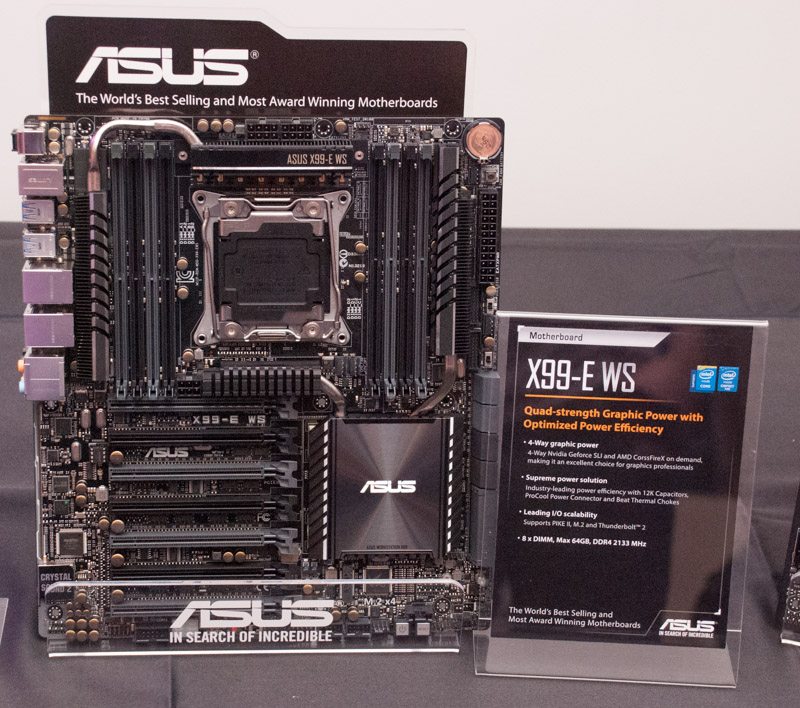 The star of the show is still arguably the Rampage V Extreme, or as ASUS like to describe it: “the one to rule them all”. The Rampage V Extreme builds on the success of the Rampage IV Extreme as well as the modifications to it we saw with the Rampage IV Extreme Black Edition. Aside from the obvious upgrades to DDR4, X99 and Haswell-E CPUs there’s also upgrades to the audio, which is now the SupremeFX 2014 implementation, and we see the return of the OC Panel add-on to control overclocking and other hardware-level features. Many of the features to the ASUS R5E are actually inherited from the ASUS Z97 ROG boards such as the KeyBot, Sonic SoundStage and so on. For those who are interested in more details about the SupremeFX 2014 audio package ASUS tell us that it is roughly equivalent to the ASUS Xonar D1 sound card although it actually performs quite a bit better than the Xonar D1. 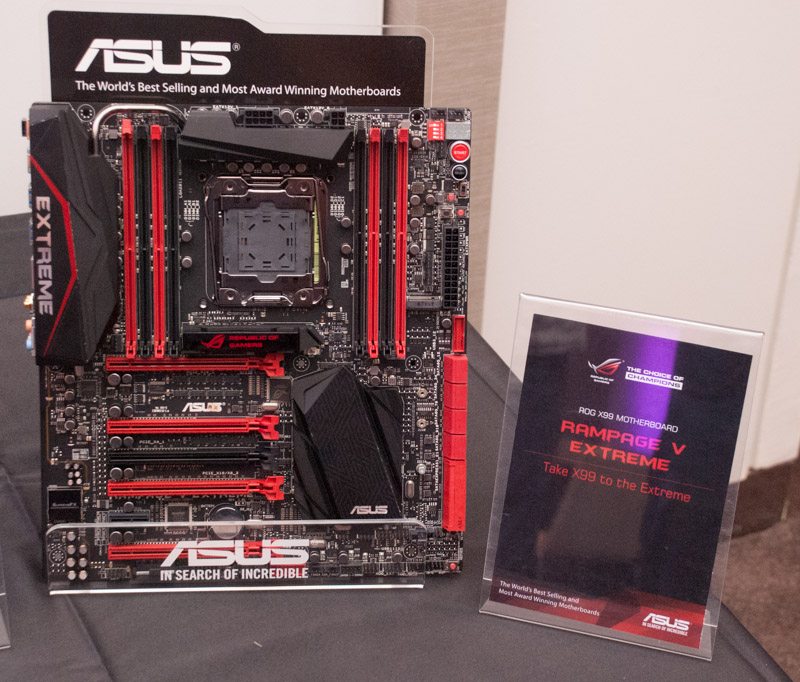