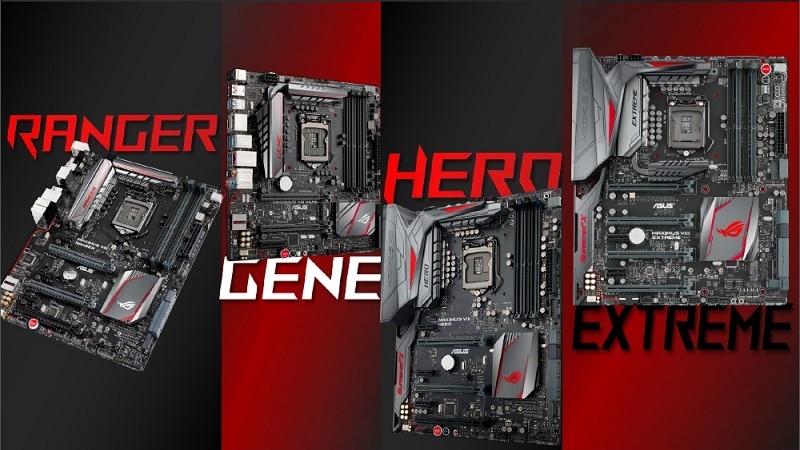 We’ve already seen what MSI, Gigabyte, ASRock and BIOSTAR plan to do with Intel’s upcoming Z170 platform. Today, we’re bringing you the launch lineup for the ROG series from ASUS. Short for Republic of Gamers, ROG has been the main gaming focused lineup from ASUS and offers their own gaming focused theme and features. These boards mark the 8th iteration of the ROG series.

From the looks of it, we have the complete launch ROG lineup with the usual suspects. We have the mATX Gene, the more budget friendly ATX Ranger, the mainstream Hero and the aptly named E-ATX Extreme. As with the Haswell launch, we can expect the ATX Formula and mITX Impact to come a bit after the Skylake launch.

Despite sticking to the familiar black and red motif, the colours are much more subtle this time around, taking a more stealthy look. The red parts act more like a highlight rather than being a main colour on the boards. ASUS also looks to have chosen a more grey colour for the metallic parts of the board, eschewing the older black.

The VRM heatsinks on the Hero and Extreme are also much more substantial than before, consuming the back I/O port as well.Given the hefty VRM sections and their beefy heatsinks, the new ROG boards should do well in the overclocking department as the FIVR is removed with Skylake.