Haswell and the Z87 chipset may be on the horizon, but the drive to have motherboards at all price points in the market for Z77 is as fierce as ever. A large number of users are seeking the budget options, both on the grounds of backwards compatibility and also their rich set of features for their competitively low price point. Not too long ago I took a look at two of Asus’ entry level boards – the P8Z77-V and the P8Z77V- LK – both of which impressed me with their performance for a mainstream board and at a really affordable price.  This doesn’t stop Asus from making things even more affordable though. Whilst the more expensive -V model had a very rich set of features that covered all grounds for someone that was upgrading their motherboard, both on compatibility and future proofing, the slightly lower spec board does (as expected) drop a few features – including HDMI.

The drop of HDMI is something that one would expect on an entry level board, but with the number of user looking for budget options rising and also the number of monitors that support HDMI rising at all levels, its a wonder why its not a standard feature these days. Fear not though as Asus have thought exactly the same and so this leads us towards the new board that we are looking at today. The Z77-A is an ~£80 board that not only offers up HDMI support out of the box, it also offers gamers features that they would expect on higher level boards with support for two way CrossFireX and SLI.

What may appear to be quite a bland set of accessories is bland for one particular reason. On the entry level end of the spectrum, bundling in tons of accessories does one thing to the price – increase it. On this end of the scale, the likely need for a CrossFire or SLI bridge is comparatively low as well as the need for four or more SATA cables – as a result Asus include the bare essentials which, in turn, helps to keep the price point down. 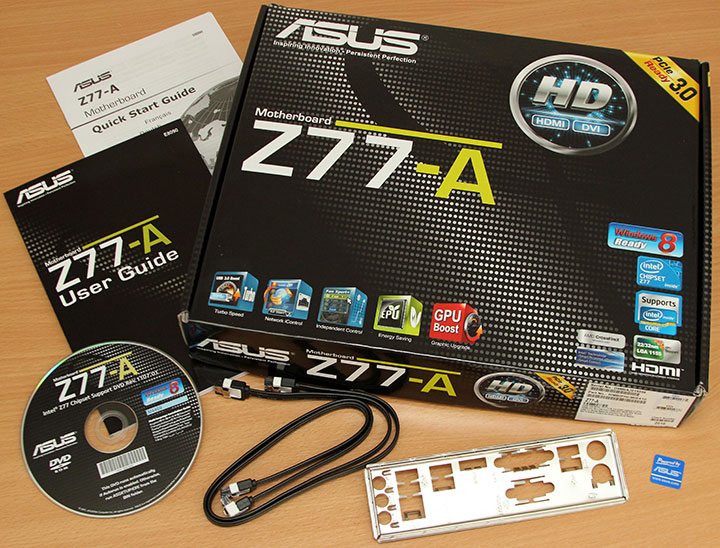