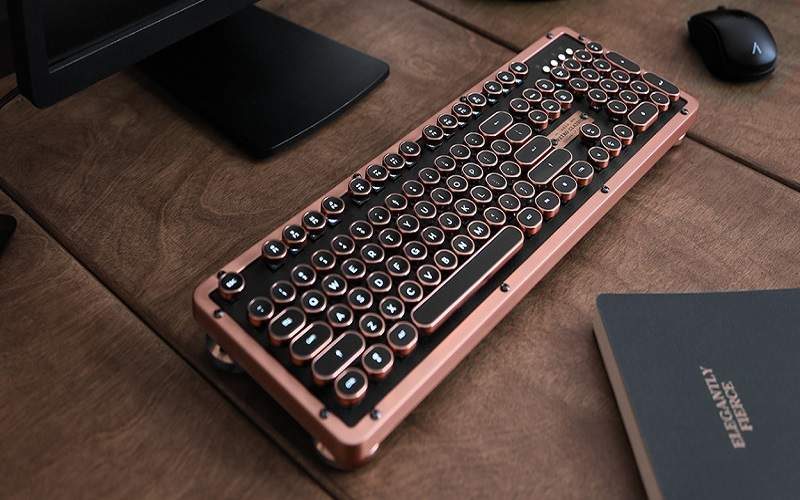 Designed for those of you who appreciate a classic-looking keyboard, the AZIO Retro Classic comes with a highly original look. Even though it resembles a mechanical typewriter, this keyboard is actually quite modern. In its original form, the product relied on conventional wires. However, it looks like AZIO has decided to create a Bluetooth version as well. If you ask me, this variant is clearly superior. The AZIO Retro Classic was initially a part of an Idiegogo campaign that aimed to increase its visibility. Some of you might argue that a wired design is definitely more “retro” when compared to a wireless one. However, the keyboard’s “wow factor” is actually linked to its buttons and frame.

What about the battery?

Well, you won’t have to charge this thing often, as it comes with a 6,000 mAh battery. This means that it can run up to a year on a single charge, as long as the backlighting is turned off. With the lights on, however, the product will run for about two months. You can always use it in wired mode too if you want, all thanks to a USB-C port. The best part is that AZIO also included a toggle switch that swaps between Windows and Mac layouts. Separate Windows and Mac layout keycaps are part of the deal as well.

If you want to get your hands on one of these keyboards, you should be prepared to spend $219.99. That’s definitely not cheap for a conventional Bluetooth keyboard. Still, the price might be justified given the powerful battery and unique looks.