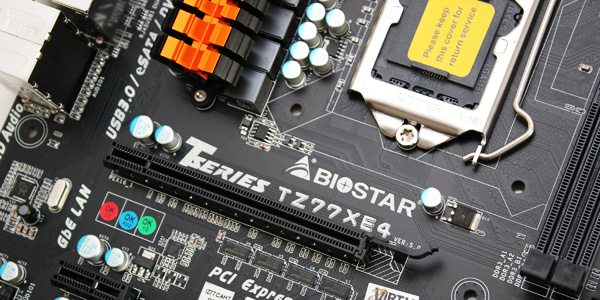 Z77 has been a great outlet for motherboard manufacturers to showcase their top products, to show the market what they can really do and we’ve seen this from the usual suspects of Asus, ASRock, Gigabyte, and MSI, but what about the other brands? Biostar are a brand that aren’t necessarily big in the UK but have a much larger presence outside of Europe and more so in the APAC region. With a good presence there, and wanting to appeal more to the European market, they want to start by jumping into the UK market with a big push.

Biostar have released a few models in their Z77 range for launch, with their top-end board being the TZ77XE4, which you may remember us previewing back in early April and didn’t have enough nice things to say about the style and design including features. From the offset, the board seemed to offer a good bundle, high-end features and a unique colour scheme which should get consumers talking, and that’s a good way to market a product.

At the time, we were restricted with what we could and couldn’t show due to NDA, but thankfully now with Z77 and Ivy Bridge both released, we can open the lid and get through the remaining boards we have, including the TZ77XE4 from Biostar.

Due to us already previewing the board last month, we see no point in treading over old ground by taking a look at the styling and feature set of the board. Instead, we’ll jump straight into the benchmarks with our i7 3770k and also see how far things can be pushed in terms of overclocking our processor.