When i hear the name Shinobi it automatically takes me back to a much simpler time when i used to sit in front of the TV playing the loved arcade game on my Sega Megadrive (Genesis). I was the master at throwing death stars i’ll have you know. Shinobi is also a term referred to a ninja, hence the game and many films named after it. This time however it refers to a case from Bitfenix which is said to offer up smooth styling and stealthy looks, giving the user room for mass amounts of components whilst keeping effective cooling and connectivity at the top of its list.

BitFenix also pride themselves on making their cases as friendly as possible to the consumer by raising the quality that is missed out on some other case manufacturers on the market. 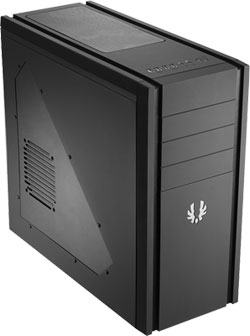 The Shinobi captures some unique features with it’s rubber coating and stealth looks, but is it as deadly as the name makes it out to be?

A brief description on the Shinobi:

Named after some of the most feared assassins of the modern age, Shinobi empowers the digital warrior to silently and efficiently dispatch his opponents. Maximum expansion and compatibility with long graphics cards enables you to equip Shinobi with the tools you need to get the job done. Superior cooling options allow the system to stay cool and collected during the heat of battle, while a sophisticated yet understated styling shows the opposition you mean business.