Call of Duty: WW2 Double Everything Playlist Now on Effect

Sledgehammer games announced that a double everything playlist is now on effect for Call of Duty: WW2. This includes 2XP, 2X Division XP and 2X Weapon XP now during the Winter Seige events. This includes Wintery Gun Game, Winter Carentan standard Moshpit and Winter Carentan HC Moshpit. Carentan is of course, one of the most iconic Call of Duty maps of all time. Players will be able to fight through a special snowy version of the war-torn French town. The Winter Seige event itself runs until January 2, so players have few more days to enjoy it. 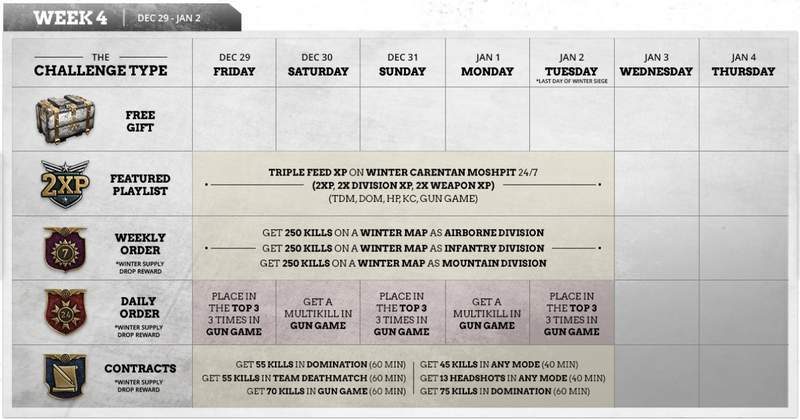 The good news is that these double XP buffs stack with existing double XP from player  supply drops, as well as Epic and Heroic weapons. At the same time, the weekly order for supply drop reward is still available for the Airbonre, Infantry and Mountain division. Provided the player gets 250 kills on a Winter map. As for the remaining contracts providing winter supply drop rewards, from December 29 through January 2, players have the following options: