Chatroom Experiment Charges You A Penny Per Character 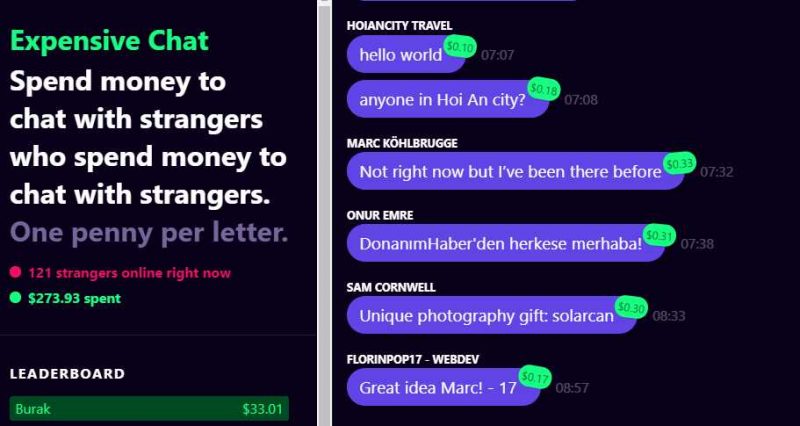 I can’t personally remember the last time I visited a chatroom. It was probably back in the days of Yahoo Chat and given that they shut that service down 7 years ago I think it is something of a testament to how the internet has changed. That is, of course, assuming that you do not include services such as Twitch and Discord which have proven to be very popular with communities.

One person, however, has decided that based upon his interactions with these kinds of chatrooms to perform a somewhat unique social experiment. Marc Köhlbrugge has launched ‘Expensive Chat’, a message board which charges users 1 penny for each character posted.

What Is The Purpose Of The ‘Experiment’

Well, many will argue that since all of the funds go to Marc Köhlbrugge, it’s an experiment to see how easily people will part with their money. To the less cynical, however, the concept is rather interesting. If you were charged for each character you posted on Twitch, Discord or social media in general, would you be less inclined to write such diatribe?…

It's a social experiment to see what happens to a chatroom when it's not a free-for-all, but every message cost you cold, hard cash.https://t.co/Ss6fMzBhoF

Where Can I Check It Out?

The ‘Expensive Chat’ website can be visited via the link here! – As above, for (just?) a penny per a character you can write your own post. This will then be placed (with a fair amount of prominence) on the website chat board. Some have used their money to write supportive chat while others have attempted to hijack the popularity by placing their own adverts. In a somewhat amusing loophole, while you have to pay to write messages, usernames are effectively free. As such, you can at least get your message out there by just having a good username. Oh, and spending a penny on a singular character post.

What do you think? Is this really a social experiment? It is really just an interesting concept to make the creator money? – Let us know in the comments!

So https://t.co/DbDFOadBtN may cost a cent per letter, but names are free…
This may be the best cent I have ever spent, thanks @marckohlbrugge! 🤔 pic.twitter.com/rKjesFeDJ6