Cooler master have a really solid range of chassis on the market at the moment, and while they have been making a push bringing some who new ranges to the market, they’ve been listening closely to their customers and fans, working on ways of improving one of the most popular chassis that they have ever created.

We last took a look at the Scout II chassis back in September last year and while there were some minor issues with it such as dust filters and a lack of high quality fans it still ticked more than enough boxes to earn out Editors Choice award. The original Scout chassis (Scout I) was and still is a big hit with system builders, especially gamers and for under £100 its hard to find a gaming chassis that looks as good or packs as many features into such a compact design. So I’m looking forward to the new refinements in this latest revision.

“CM Storm Scout 2 Advanced is the upgraded edition of Scout 2. It supports up to 9 fans, including two pre-installed 120mm red LED fans in the front for optimized cooling. It features improved steel reinforced carrying handles, bolted to the core structure. The top console has been upgraded to USB 3.0 for high power charging and lightning fast file transfers, and can be hidden and protected from dusty battlefields, friendly fire and melee attacks behind a slide cover. The 1st HDD cage can be removed, to support monster VGAs like the NVIDIA GTX 690 and AMD HD 7990, turning it into a powerful Battlestation.” – cmstorm.com

The chassis comes nicely boxed and Cooler Master have put in some effort on the box graphics, something that should appeal nicely to the gaming community. 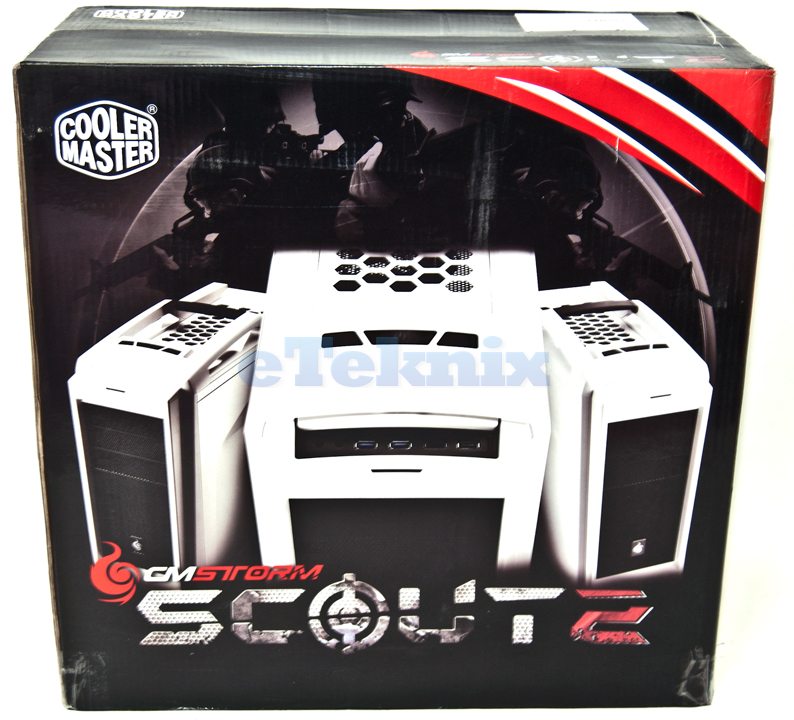 In the box I found a stack of clip-on hard drive rails for 3.5″ drives, some cable ties, a motherboard speaker, instruction booklet and all the usual screws and bolts.