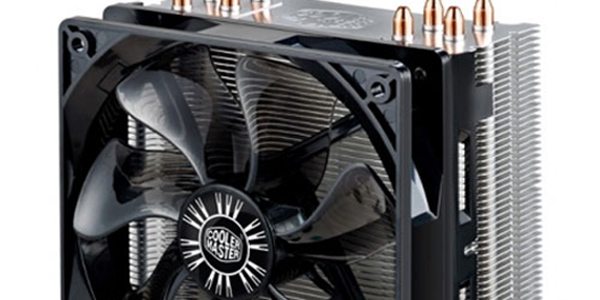 The Hyper 212 EVO is very similar to its predecessor in terms of design. It utilizes 4 6mm copper heatpipes which converge to form a H.D.T (heatpipe direct touch) base. The heatpipes employ Cooler Master’s patented Continuous Direct Contact (CDC) technology which they claim will “act as a virtual vapor chamber that dissipates a large amount of heat”. Our testing will give you an idea as to whether their claims are true or not. An aluminium fin stack which is supposedly optimized to provide the perfect balance between high and low fan speeds will dissipate the heat carried through it by the CDC heatpipes. A 120mm PWM fan provides the Hyper 212 EVO’s airflow and is capable of pushing 66 CFM of air at a speed range of 600-1600 RPM (600-2000 RPM for the non-European version). Cooler Master claim that their fan’s “unique wave-shaped blade design” offers excellent airflow. Hopefully this claim is true as the Hyper 212 EVO is sacrificing 400 RPM of its fan speed in comparison to its predecessor.