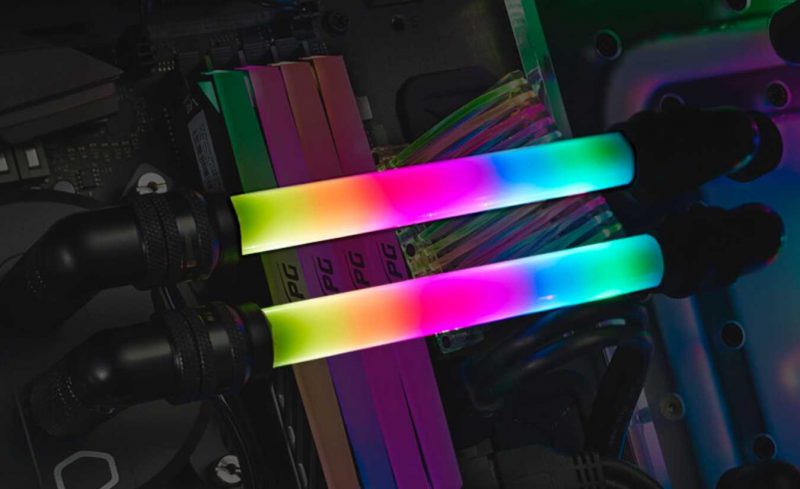 RGB lighting is usually the most common way in which most people try and make their systems look a bit amazing. Admittedly, some hate it and in fairness, I can understand why. Some systems have the look of an epileptic’s nightmare. Particularly on the ‘budget end’ of the scale when the vast majority of the RGB isn’t addressable and as such you’re left with about fans, RAM, coolers, LED light strips and even a power supply all dazzling you with different effects.

When done well though, an RGB system can look fantastic. Particularly when people go to the effort to get it all running in sync.

With this in mind though, Cooler Master has revealed something pretty special. In a Twitter post, the company has revealed that they have successfully developed a fully addressable RGB tubing for custom loop systems.

What Witchcraft Is This?

Cooler Master has achieved this 3D printing a custom ‘holster’ with an LED set to the rear. From there a relatively standard clear tube can be inserted. It’s not witchcraft, but it certainly is pretty clever stuff. Either way, this is clearly going to be of a huge amount of interest for custom loop builders. Particularly since Cooler Master offers to produce this to order at your own designated length.

Switch up your liquid coolant to Addressable RGB! Is it possible?!! pic.twitter.com/Z5PHEwDRTS

Ahh, well there you hit upon a snag. For reasons which are a little unclear at present, this is currently only available in ‘Asia’. This is confirmed on the products webpage which you can visit in the link here! I’ve tried to see how much this costs, but through their website, I haven’t been able to do so. Rest assured, given that this is custom made and printed, I daresay quite a lot. I’m pretty sure it’s no coincidence that in the picture Cooler Master only used about 10″ of it. It would, however, be fantastic to see a more elaborate custom loop system use this.

We can only hope that this comes to the ‘West’ in the near future.

What do you think? Impressed with the ARGB lighting? – Let us know in the comments!