When I get a full system in for review, typically I will find an Intel CPU lying at the heart of the system and whilst this is partly due to their high level of popularity,; along with their multitasking abilities – for some the overall cost factor can be a bit of an issue. Naturally this means that there is only one other route to go down and this is with AMD and their line of CPUs. From our own testing of AMD processors we know that they offer a slightly cheaper alternative to some of Intel’s top line chips – such as the i7-4770k, although we do find that in some tasks, they may struggle to keep up the blue teams performance. For gamers though, all-round performance is not the main priority – it’s having a system that can offer up a great level of gaming performance and for an affordable price.

Coming forward to the last few months, AMD recently announced the release of their latest CPU into the Piledriver group of FX chips – namely the FX-9590. Now like all new processor releases, it has come into the market with a mixed response from the enthusiast community, however it looks like it has proved its way and has settled itself down in the market as the new contender to Intel’s Ivy Bridge-E i7-4960X, offering a huge difference in price as we are used to seeing with AMD chips. We know as well that anyone looking for a high-end gaming system but on a tight budget is going to benefit from an AMD chip, although the trade-off is with performance in other workload areas as mentioned above.

Cyberpower PC as we saw at this year’s Consumer Electronics Show are right on the money when it comes down to building both entry-level and high-end systems and one of their latest systems to come to the market through their UK offices is the Ultra Fusion. This pure AMD system is built into the highly popular Cosmos SE chassis from Cooler Master and is set to offer some of the best gaming performance available for anyone who is a through and through fan of AMD – or even just a pure gamer at heart! Laid on to a Gigabyte motherboard and given some HyperX Genesis memory from Kingston, this closed loop water-cooled system certainly looks the part with its spread of blue lit fans, but the real question is, how does it stack up against an Intel / NVIDIA offering? 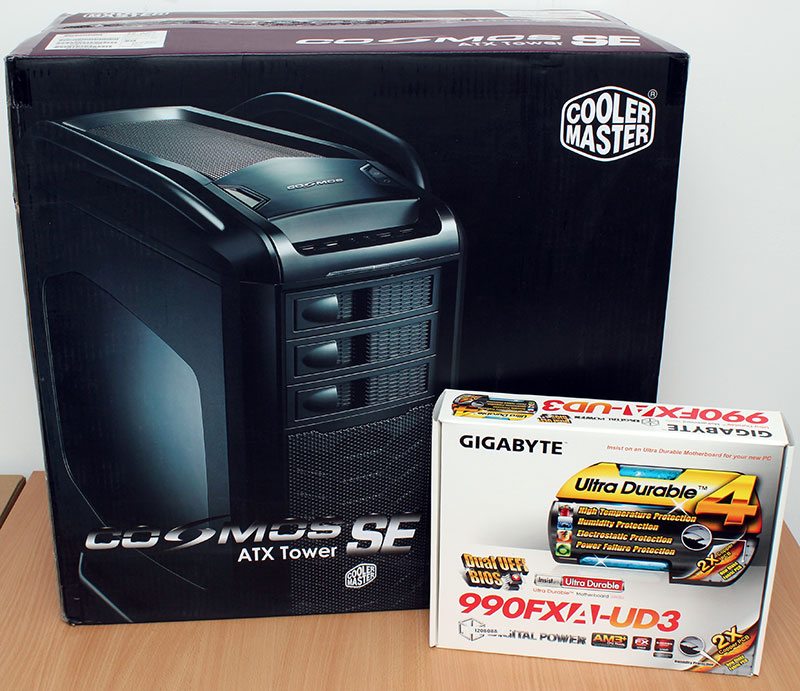 When I took a look at the Ultima 460i Scimitar from Overclockers UK a few months ago, one comment that I made about the system was its weight. This was partly down to the extensive list of water-cooling components that had been installed into the Cosmos II, but it also had a lot to do with the weight and bulk of the super tower chassis itself. Thankfully this little brother to the Cosmos II, is far more compact and therefore easier to handle and even with a full system built-in, it’s far lighter to move around.

Like most other systems that we’ve seen shipped out, alongside the system itself, we get the motherboard box included as well and inside this is all the manuals, warranty cards and accessories that comes with each of the components, just in case they are needed or if you wish to upgrade anything at a later date.