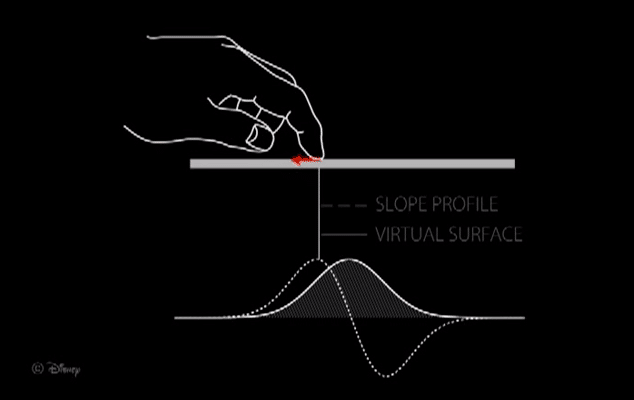 Disney have been working away in their lab to find a way of bringing tactile feedback to mobile devices. A new paper released from Disney Research shows that friction can be used to create an artificial sense of texture, giving the sensation that you are touching an object that you can see on the screen of your mobile device.

By creating an algorithm that generates levels of friction on the screen which closely match the friction your finger would feel were it touching the object on display, then you can trick the brain and your finger tips into thinking you are touching that object, even if it is on a flat surface, very clever.

“Our brain perceives the 3D bump on a surface mostly from information that it receives via skin stretching. Therefore, if we can artificially stretch skin on a finger as it slides on the touch screen, the brain will be fooled into thinking an actual physical bump is on a touch screen even though the touch surface is completely smooth.” said Interaction Group director Ivan Poupyrev.

This level of friction generated by the device is constantly changing as you move your finger and as the object moves on screen, further adding to the illusion.