NCIX Tech Fair 2016: To celebrate 20 years in the business, US and Canada tech retailer NCIX hosted their Tech Fair 2016 over the weekend. As expected of any Tech Fair, many of the big industry names had their own booths to showcase their latest products. The big highlight of the event though were the 3 VR headset demos they had running the whole event. Unsurprisingly, the line ups were long but I got a chance to try out the HTC Vive, Oculus Rift and Open Source VR in quick succession. Sadly, Sony did not come so PlayStation VR will have to wait for another day.

First up was the OSVR Hacker Dev Kit from Razer. Announced last year as an open source hardware initiative for VR, the OSVR is the youngest of the three main PC headsets and this really showed during the demo. Even running a simple demo reel of a mech street battle, the entire experience was stuttery and buggy. This is a disappointment considering the launch had a great demo playthrough. The VR aspect of it was fine though with good head tracking and no motion sickness at all. The headset itself wasn’t too heavy or tight, being decently comfortable. The issues just show that while the hardware is good, the software side really needs improvement to make it just work. It really lives up to its Dev Kit title. Hopefully, we’ll see these issues ironed out shortly. 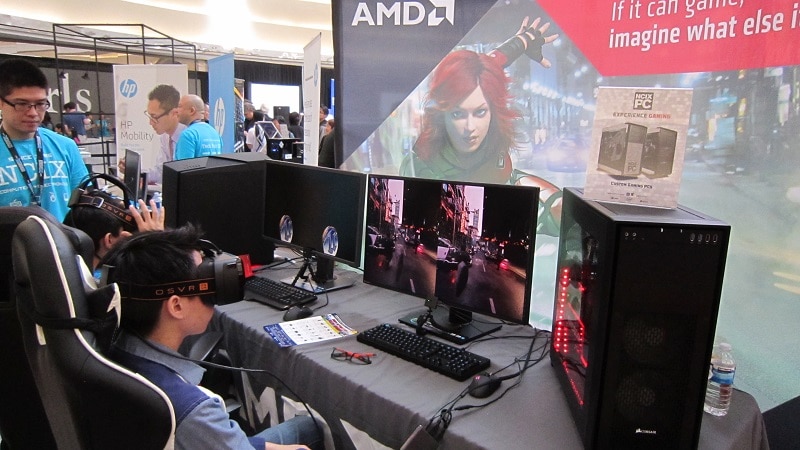 Next up was the HTC Vive, complete with the motion controllers. We got to try out a real game, A-10 VR from Futuretown, an arcade shooter not unlike the other popular Vive title Space Pirate Trainer VR. VR really takes to the arcade shooter genre and the demo provided a fun experience. The tracking cameras had no trouble following me, allowing for precise aim to shoot up the targets. The Vive even accommodates those who are visually impaired provided your glasses are small enough. My only complaint would be relatively tight fit but it did well to keep light out and motion sickness was not a concern. 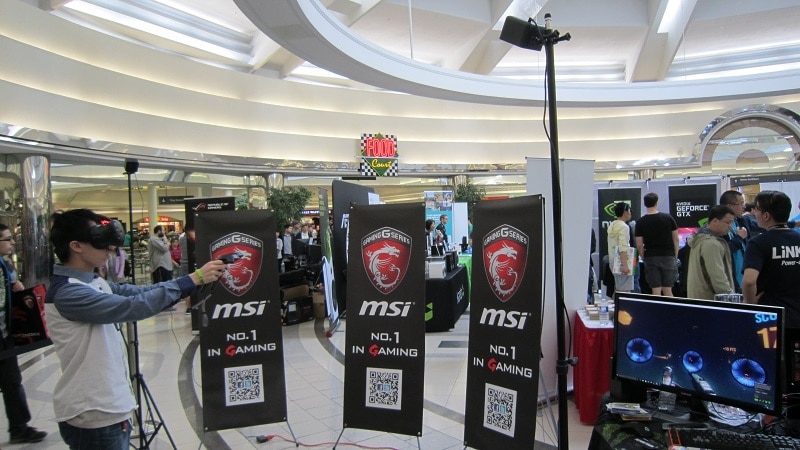 Finally, we had the Oculus Rift, running the original roller coaster demo. Having tried the original dev kit back in the day, the launch product is far superior, with better graphics, resolution and head tracking. It provided a pretty realistic VR experience, enough to give me a bit of motion sickness, something other users also experienced. The less than tight fit did let some light in, hurting immersion. Unfortunately, we did not get a chance to try out some gameplay with the Rift. 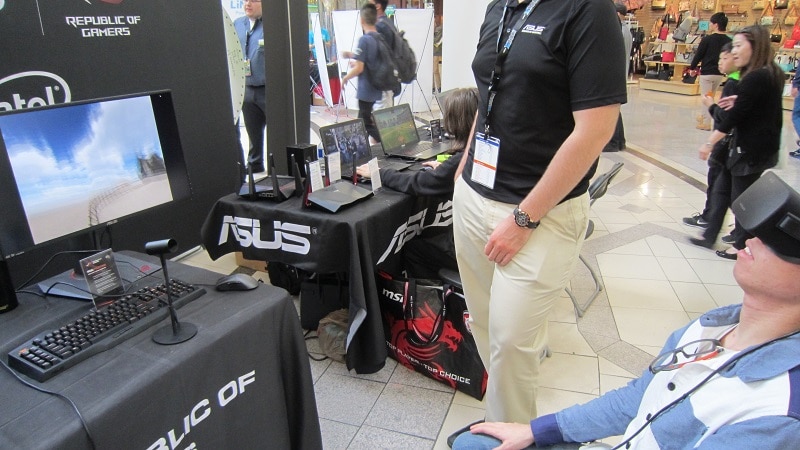 Between the 3, I honestly have to say I liked the Vive the most. VR takes naturally to room scale and standing play and as we learned from the Wii and Kinect, this is a potential major market. The HTC Vive controllers and the wider tracking field offer a significant advantage over the Oculus Rift. Once Oculus comes out with a wider camera tracking range and Touch controllers, the playing field should become more competitive. Until then, I feel that HTC Vive would be the better choice, provided you want to fork out the extra cash.