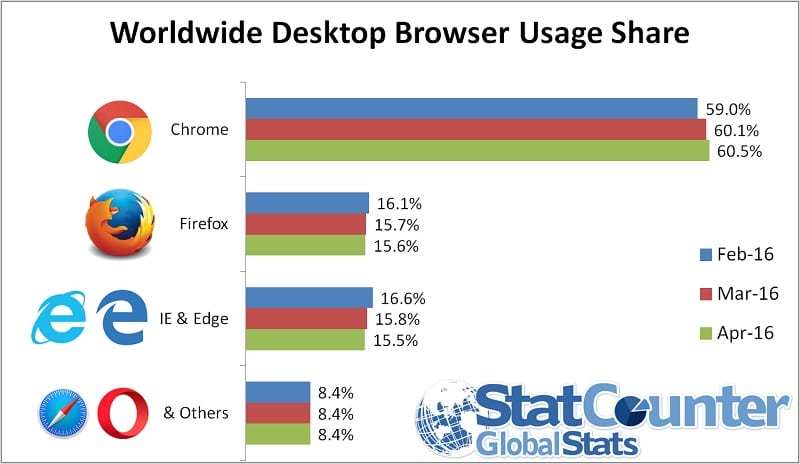 Arriving to market in the early 2000s, Mozilla Firefox soon offered a viable alternative to the Microsoft Internet Explorer dominated landscape. After defeating Netscape, Microsoft IE soon stagnated and Firefox became the go-to browser for those who wanted more. Even with the rise of Chrome, Firefox has retained a loyal following over the years. This past month, for the first time ever, Mozilla Firefox has managed to inch its way past all of the various Microsoft browsers combined.

In April, Firefox managed to capture 15.6% of global desktop marketshare, inching ahead of Microsoft which had 15.5%. Of course, Google Chrome is way ahead of the pack with over 60% but it’s still good news for Firefox. Funnily enough, both Firefox and Microsoft have been losing marketshare, so Firefox simply just lost less than IE in order to pull ahead. Given that internet usage is still going up, both Firefox and Microsoft likely added users but Chrome simply added more.

While Microsoft may have expected to gain marketshare with Edge, it doesn’t appear that has panned out yet. The browser is still missing some functionality which is set to be remedied later this year. Furthermore, the loss of Windows XP may have killed off IE6, with users perhaps going with Chrome or Firefox on their new machine. Either way, it looks like Microsoft has some work to do to gain back users.