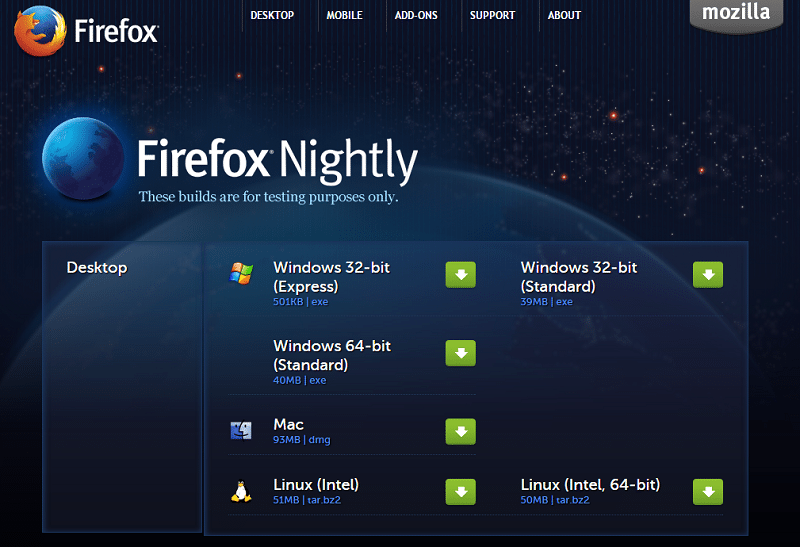 Mozilla has joined the 64-bit browsing party with Firefox for Windows, but only in the Developer Edition for now; it’s a start right?

The Developer Edition is a special version of Firefox with built-in tools for creating websites and web apps. While OS X and Linux already have a 64-bit version, Mozilla is just adding a Windows build with 64-bit support now.The main advantage of 64-bit browsing is the ability to address more than 4 GB of RAM, allowing for beefier web apps. As an example, Mozilla points to games that run on Epic’s Unreal Engine, noting that a 64-bit browser can store significantly more assets in memory. “For some of the largest of these apps, a 64-bit browser means the difference between whether or not a game will run,” Mozilla wrote in a blog post.

Beyond the additional memory, Mozilla says the 64-bit browser is simply faster, speeding up JavaScript code through new hardware registers and instructions that aren’t available with the 32-bit version. In one test of certain JavaScript applications, throughput improved by 8% to 17%. It’s unclear when 64-bit browsing will make its way to the main version of Firefox for Windows. But given that the Developer Edition is on version number 38, and the stable version is on 36, a mainstream release is probably a few months out. If you’re running the Developer Edition now and want to switch to 64-bit, Mozilla recommends uninstalling the Win32 without deleting your profile, and then downloading the 64-bit version.

Thanks to PCworld.com for this information