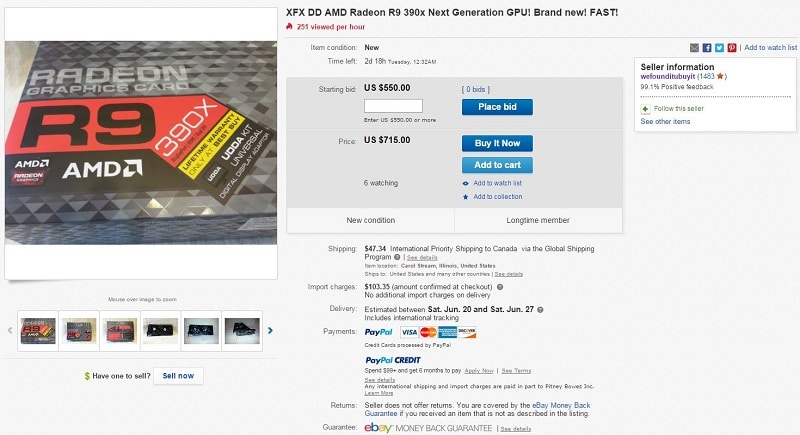 Almost every time someone manages to get their hands on a piece of tech early, they try and sell it on eBay. User MoNkEyHuGgEr369 from Youtube seems to be no exception and has posted his AMD XFX R9 390X for sale on eBay already. From his unboxing video on Youtube, the card appears to be legit but don’t take our word on it.

With bidding starting at $550 USD, that’s about a $100 markup over the purchase price of $450 though sales tax might eat up half of that. So far there are no bids yet but there’s still almost 3 days left. Those who can’t wait can shell out $715 to grab the first on market R9 390X. With heavy import fees as well, the price balloons for anyone outside the US.

Even with International Priority shipping at $47, the card won’t be reaching anywhere outside the United States till about June 20th. That means you’ll be getting the card about 4 days after the official launch meaning you might actually get your card first if you wait till June 16th. Of course, the bragging rights to claiming the first ever R9 390X available to the public may be well worth the money and time to some.

Thank you reader Craig Ferrie for the tip!