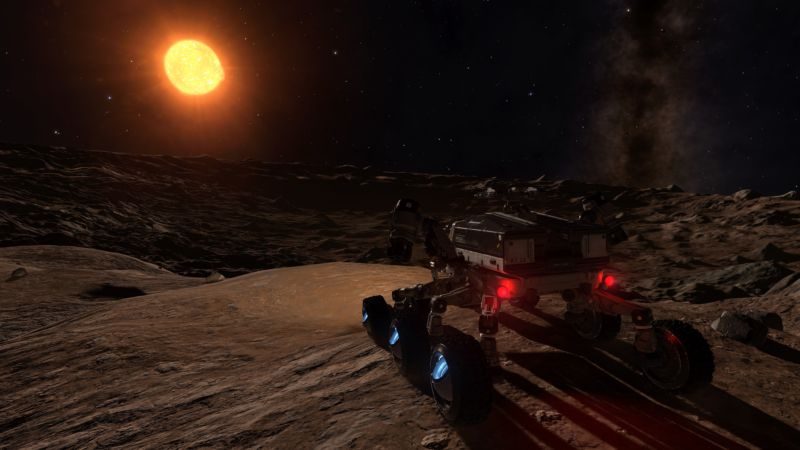 Earlier this week, NASA announced that it had discovered seven Earth-like exoplanets, all orbiting the same star, which could all potentially support life. The dwarf star system, dubbed Trappist-1, is now been added to the latest update of space adventure game Elite: Dangerous. As chance would have it, though, instead of adding an entirely new system to the game, developer Frontier has modified an existing system that shares very similar traits and location that was generated by its Stellar Forge tech.

“The recent announcement of the discovery of the Trappist 1 system is exciting. The star, an M8 dwarf red star is right at the bottom end of the M class stars, so faint it is only just visible in the most powerful telescopes, and doesn’t feature in most star catalogues for this reason. Luckily, though, the system is almost exactly ‘edge on’ from our viewpoint – which means it is possible to ‘see’ the planets as they occlude the tiny star, and an incredible seven terrestrial planets have been spotted around the star by this technique, three of them in the ‘habitable zone’.

Even with Hubble, the fainter M class red stars are only just visible at 40 light years, which is why Trappist 1 is not in most of the star catalogues. Beyond this distance we can see ever fewer M class stars – particularly the fainter ones like this M8 – and it is where our procedural generation begins to kick in – supplementing the brighter, more visible stars.

The way Stellar Forge works is to use ‘available mass’ from which to generate systems – and because of this unaccounted mass, Stellar Forge has created a system with a Brown Dwarf in very nearly the same place – 39 light years away – this is only a little smaller than an M8 – and it even has seven terrestrial worlds around it – Core Sys Sector XU-P A5-0.

Interestingly the system that came out of Stellar Forge has a couple of moons, and a couple of co-orbiting binary pairs – these things would not (yet) be detected in the occlusion technique, as this is simply detecting the darkening of the stellar disc, but who knows, this might be possible.

Because of this we have tweaked Stellar Forge with the data from the recent discoveries so that the planets are now the same – and we have renamed it Trappist 1 – but the great thing is it is only a small tweak! We may still add a few moons back in, and this should go live in beta 2, and will of course be in 2.3 when it goes live to everyone.”

The 2.3 update for Elite: Dangerous – “The Commanders” – is out in beta form tomorrow (26th February), but it won’t include Trappist-1 until the second phase of the update.