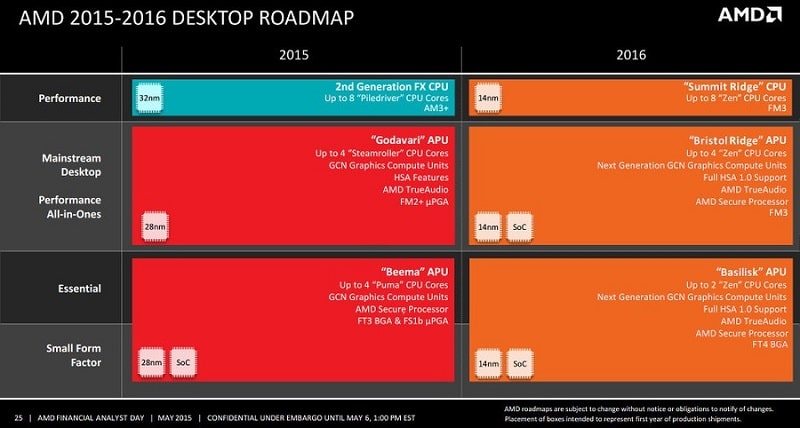 AMD is either orchestrating a hype campaign or they really can’t keep their secrets. This time around, the CPU roadmaps for both desktop and mobility have been leaked out to 2016. These roadmaps clarify a number of rumors and leaks over the past while as well lay out AMD’s long-term strategy.

For the desktop segment, 2015 is pretty much more of the same. Piledriver continues to drive the performance segment on AM3+ while Puma cores hold the low end. Kaveri gets a rebrand to “Godavari” making previous rumors around Godavari moot.

An important confirmation is the use of 14nm throughout the product stack. 14nm will bring AMD to parity with Intel Skylake. While Intel is set for 10nm in 2016, there have been signs that there will delays with that process. 14nm also means continued usage of Global Foundries, maybe with Samsung as a secondary supplier since the designs can now be easily be ported between the two firms.

Zen looks to be AMD’s go to architecture for 2016, covering everything from the performance to low power segments. It’s ability to replace the low-end Puma cores likely means the architecture is well power optimized and efficient. Scaling from 2-8 cores, some rumours are also pointing to simultaneous-multithreaded making an appearance, meaning up to 16 active threads are possible. It does look like rumours of a true 16 core consumer CPU were wrong though. The top end chip is codenamed Summit Ridge while the mainstream APUs are Bristol Ridge, complete with HSA 1.0. The small form factor and budget range will be served by Basilisk. Both Summit Ridge and Bristol Ridge are on the new FM3 socket while Basilisk is BGA.

On the mobile side of things, it much of the same. In 2015 Carrizo gets an update to Excavator cores, likely a minor tweak of the current Steamroller. For 2016, Bristol Ridge serves the performance and mainstream segments at 15-35W while Basilisk targets low power at 5-15W. Ultra low power moves from Amur with ARM A57 cores to Styx which sports up to 2 K12 cores to hit about 2W. 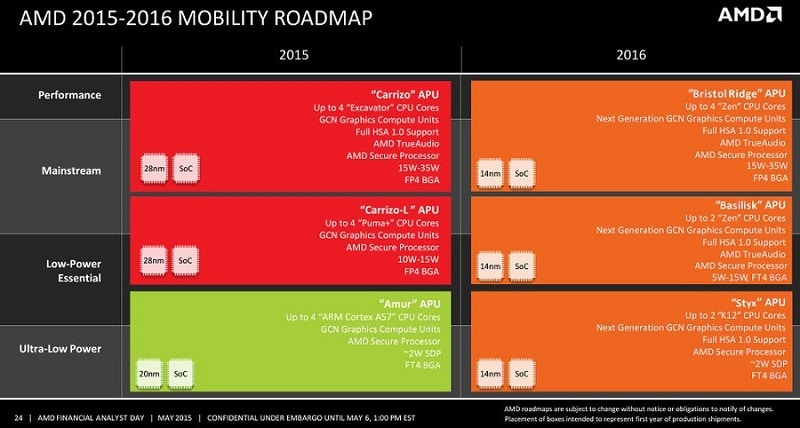 With all this information out already, it looks like May 6th will an important day not just for AMD fans but for PC fans in general. I doubt there will be much left to leak on the CPU side from AMD until then. 2016 looks like it will be a very interesting year if AMD can finally start competing with Intel using Zen.