So its just over a week since NVIDIA officially announced their contender to the single GPU battle between themselves and AMD. The GeForce GTX Titan has been the talk of the town for a little while and now we are finally able to get our hands on one and see what the fuss is all about. NVIDIA have said that they are going to leave it to us, the reviewers, to decide whether or not this new card is any competition for AMD’s 7970. This naturally can be taken either way in that they honestly don’t know how it will compare, or they are hiding the fact that this is not only going to give AMD a run for their money, but they will have to sprint to keep up.

So what is so special about the Titan? Well NVIDIA has dubbed this as potentially being the worlds most powerful single GPU in the world and that it is build for the next generation of supercomputer gaming. At the same time, with the announcement from AMD that they won’t be bringing out any more GPUs until next year and until then will be sticking with the 7000 series for desktops (even though we know the mobile 8000 series are about), it looks like this could be the one and only major release of the year meaning that if NVIDIA can pull it off, they potentially could be holding the top spot and podium for a large portion of time when it comes to single GPU cards.

The card has been named after what is currently the worlds fastest super computer – ‘Titan’ – a behemoth of technological engineering, packing in 18688 AMD Opteron 6274 16-core CPUs, 18688 Tesla K20X GPUs, 710TB of total memory, 10PB of storage, an a theoretical peak speed of 27petaFLOPS. The Cray supercomputer which consumes a whopping 8.2MW of power costs a total of $97 million and resides at the Oak Ridge National Labratory.

We saw a few of the Titan’s highlights mentioned last week when NVIDIA lifted the NDA on the cards specifications, but to refresh ourselves on these, the single GPU design houses 2,688 CUDA cores and 7.1 billion transistors and runs at a speed of 837MHz boosting to 876MHz – this is topped with 6GB of GDDR5 memory. A key feature that we will point out that is new to Titan over any other NVIDIA GPU is GPU Boost 2.0. This works in a similar way to how GPU Boost operates on other cards, however rather than limiting the cards overclock to staying within a certain power envelope, GPU Boost 2.0 now allows to card to go even further and overclocks the card dynamically whilst keeping it under 80 degrees Celsius. This in effect means that the card will be able to overclock itself to a higher speed and since the temperature is linked directly to the vCore, the board and adjust the voltages more accurately and higher at the same time to keep the card stable.

This is not where the new features end, there is also display overclocking, a concept that allow most monitors to display frame rates higher than they typically would be able to under normal circumstances. Typically most displays run at 60Hz, although there are a number that can run at 120Hz (normally 3D enabled panels) and to put this into frame rates, 60Hz = 60fps, so whilst the card is able to push out far more than this, the panel will only display at its refresh rate. What the Titan is able to do however is overclock the refresh rate of the screen and by increasing the frequency to say 80Hz, the screen will now actually display more frames each second to give a smoother image.

Keeping things simple and to the point, we find a standard Gigabyte / NVIDIA box design with the blue Gigabyte eye that we have come to associate with the GPUs. 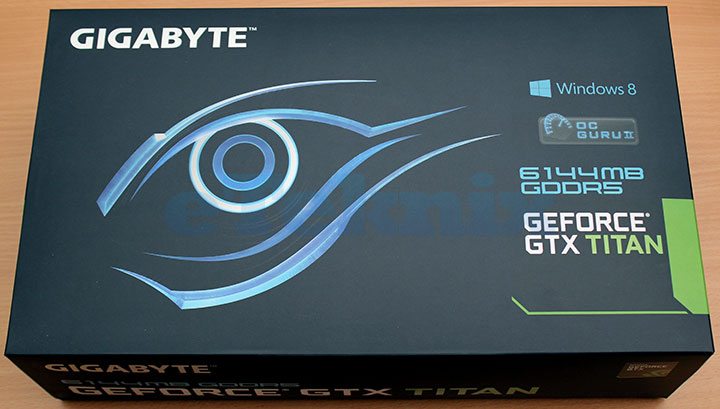 Inside the box, we find a tube containing a MP8000 gaming mouse mat and a separate box with a quick start guide, driver CD, VGA adapter, two power adaptor cables, a HDMI lead and a new addition to the Gigabyte array of goodies, a pack of branded cards. 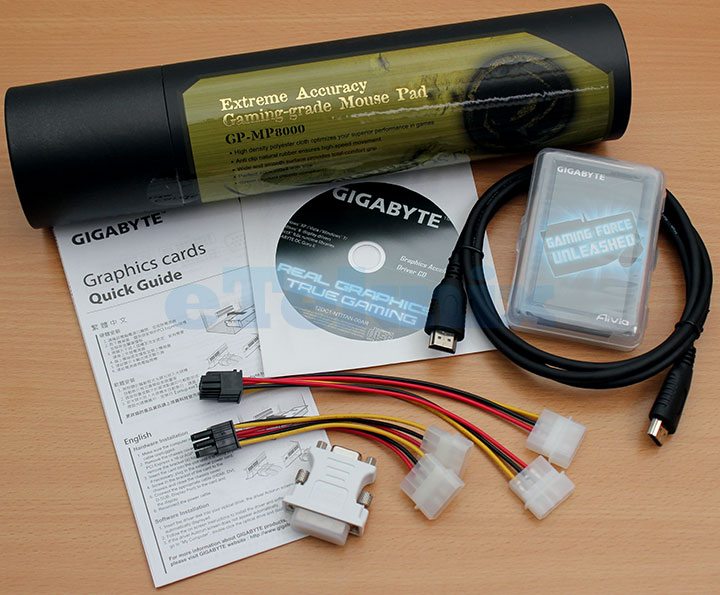