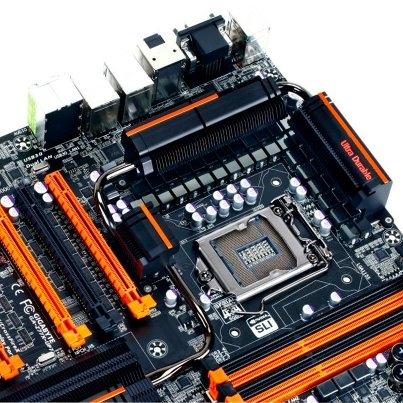 Gigabyte’s main marketing focus in recent times has been to show off the massive advances they have made in power delivery, notably through the use of R3550 PowIRstage ICs to deliver more clean power at lower temperatures. All this has culminated in a rather outrageous demonstration from Gigabyte which shows their Z77X-UP7 motherboard delivery 2000W of power through the Intel LGA 1155 socket.

The test system, consisting off two 1200W power supplies, a Z77X-UP7 and three DC load testers was required to send such a large amount of power through the board. To some this shows just how overkill modern motherboards really are, 32 phases can delivery 2000W of power and Gigabyte says that is enough to power 25 Core i7-3770K CPUs. However, to others having such a large amount of power potential is great for extreme overclocking and more efficient power delivery – not to mention it being really cool in a nerdy way.

This wasn’t just an opportunity to big up the R3550 PowIRstage ICs, Gigabyte also wanted to show off the finalised Z77X-UP7 design that we last saw at Computex 2012. The boards has had a change of colour scheme and of heatsink assembly since Computex 2012.