This has to be one of the sexiest looking motherboards on the market. Kudos to Gigabyte for offering up a Black Edition board because it looks great. As with most Gigabyte motherboards the layout is spot on: power connectors in sensible locations, especially the supplementary SATA, and all the front panel connectors are clustered around the same part of the motherboard for easier cable management. 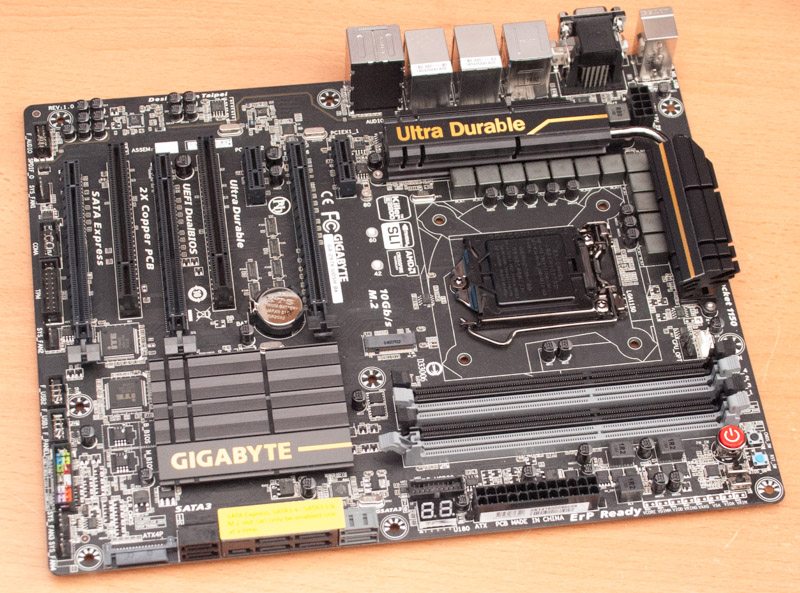 This motherboard really is an impressive piece of craftsmanship that oozes quality and performance. I know a lot of people will liken the colour scheme to MSI’s Lightning series products but I think the board is unique enough to avoid that kind of confusion. 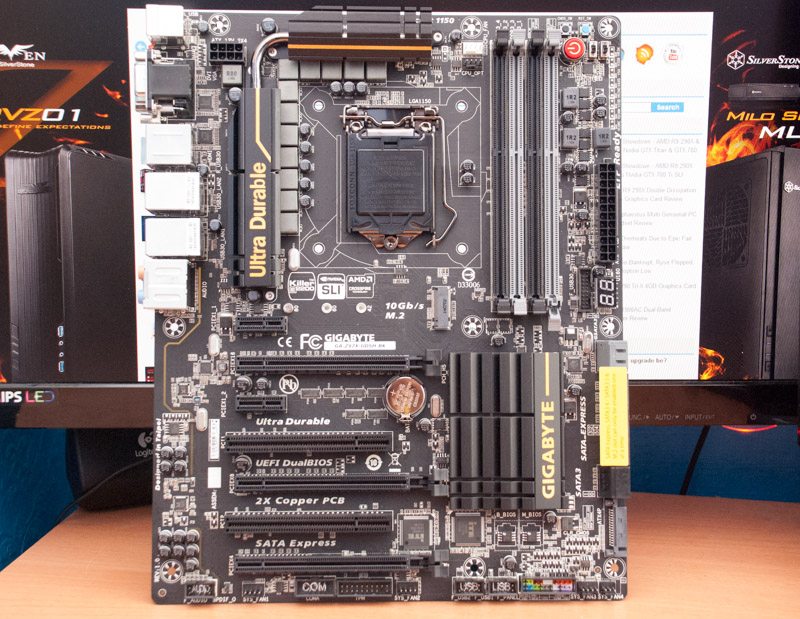 Gigabyte’s Z97X-UD5H-BK comes with a 12 phase digital VRM for the CPU socket and the VRM heatsinks are adjoined with an 8mm heat pipe for better heat transfer. 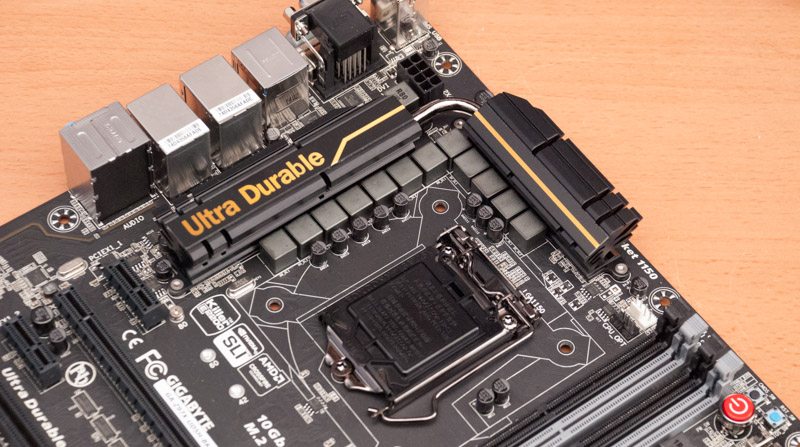 Down by the memory banks we find a power button, reset button, clear CMOS button, debug LED and voltage read-off points. These features are really appealing to the overclockers and enthusiasts among our readers. 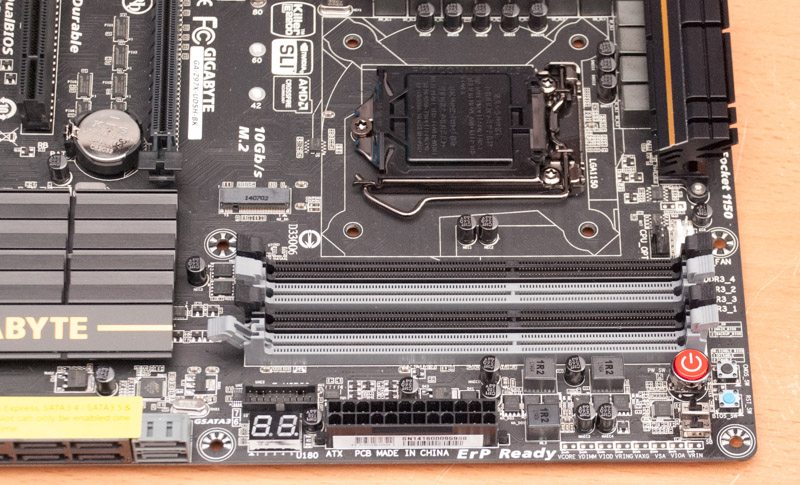 Down near the PCH heatsink we find eight SATA III ports. The grey ones at the right are provided by Marvell, the black and dark grey ones via Z97. Note ports three and four cannot be used at the same time as M.2 or SATA Express. Note that you have to pick between SATA Express OR M.2 OR SATA3 ports 3 & 4.

The PCH heatsink has a nice rugged design that suits the board well, sadly there’s no LED lighting but it still looks good. 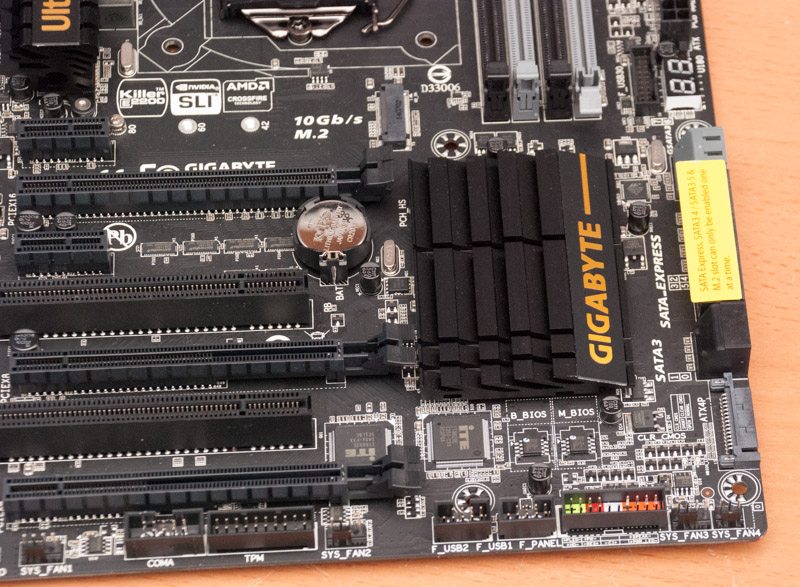 The PCI layout is solid, you get triple spacing between the main PCIe lanes so you have breathing room if you want to run SLI or CFX GPUs. Gigabyte have also been sensible enough to offer a mix of PCIe 1X and PCI slots – I think open ended PCIe slots would be much nicer so that’s a potential area for Gigabyte to improve on. 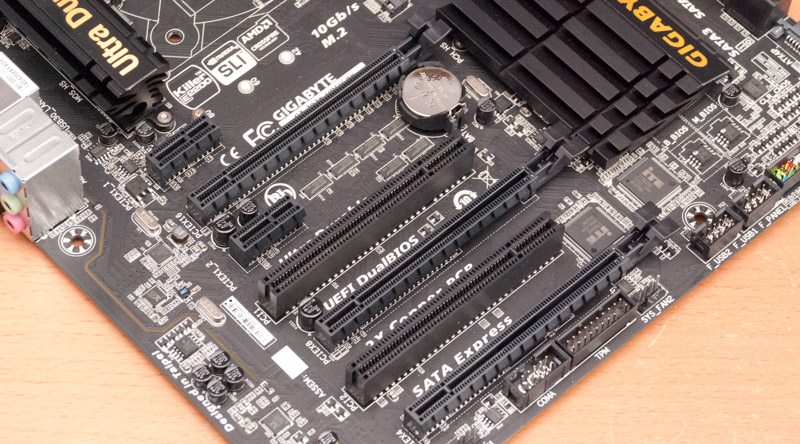 Down the back we find the isolated PCB for the audio implementation. There is a fair amount of space between the audio and the rest of the board so we should see good results that reflect the lowered electrical interference.

Around the back of the CPU socket we can see the dual CPU fan headers and the CPU 8 pin. We can also get a clearer look at that 8mm heat pipe connecting the VRM heatsinks.

The rear I/O offers up:

Note the Intel LAN port is the one on the left and the Killer on the right.

The bottom of the board reveals the matte black PCB and that the heatsinks are all screwed in. I mentioned on a few Gigabyte Gaming Series reviews that they needed to secure the heatsinks better because the pushpin mechanism was inadequate. This motherboard does not have the same issue, the heatsinks are rock solid and screwed in. 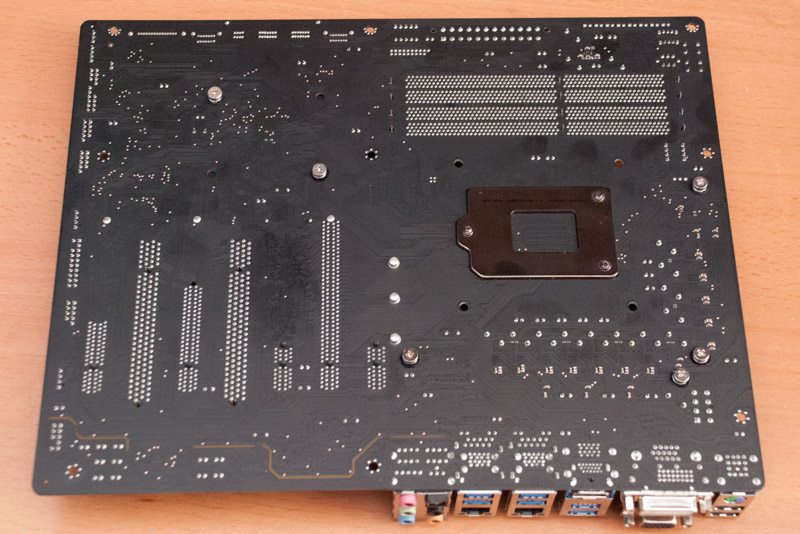