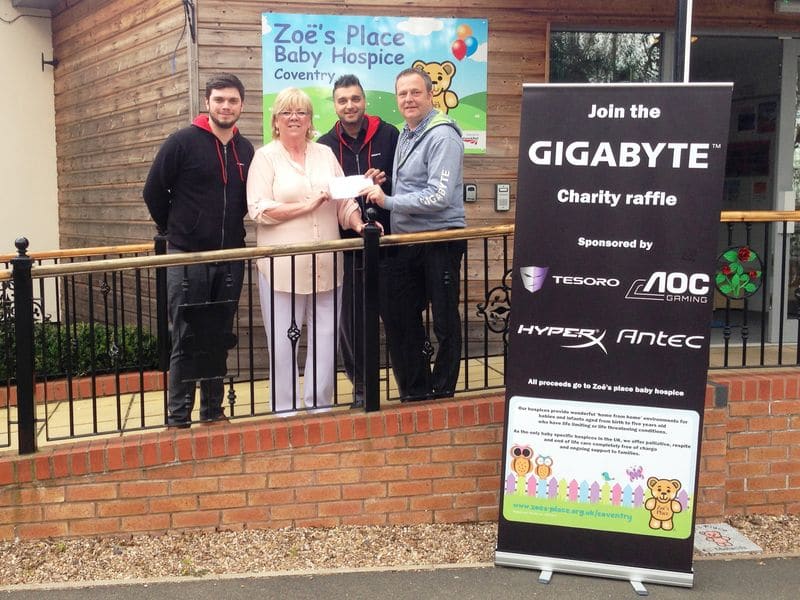 Gigabyte, together with other big hardware players such as Antec, Kingston HyperX, AOC, and Tesoro, hosted a big charity raffle during Insomnia 54 in Coventry. The deal was, you buy a ticket for the raffle and in return had a chance to win some great hardware such as AOC monitors, HyperX SSDs, Antec cases, Tesoro keyboards, and also Gigabyte motherboards and BRIX projectors. The best of all was, all the proceeds from the raffle would go to Zoë’s Place, a baby hospice in Coventry.

The raffle was a big success, actually there were two of them, one on Friday and one on Saturday of the event. The counting is done and Gigabyte could hand over a check for £1700 to Zoë’s Place.

Zoë’s place is a baby hospice that provides palliative, respite and end of life care for babies and infants aged from birth to five years and suffering from life-limiting or life-threatening conditions. There couldn’t be a much worthier cause for donating, and the Insomnia gamers thought so too.

Gigabyte also promised to be back again with a new Raffle at the next Insomnia event, i55. Let us hope that it will be at least as successful as this one and that it will raise even more money.