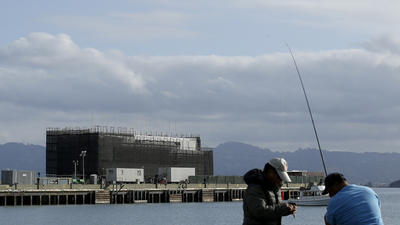 Just what the hell are Google doing with those two giant barges that they built? A question that has long been on the mind of the worlds press, especially given that the projects are freaking huge and any fine details are shrouded in complete mystery. What’s incredible is that despite their massive size, no one has worked out what they do, with the best estimates previously being that they would be some kind of floating show-room for Google products, or a kind of at-sea server / data farm.

Now the mystery continues as Google have offloaded one of their barges in Portland, Maine, while the other resides in Stockton, Cali. Made of four story high buildings constructed of cargo containers, the Portland barge was dismantled and prepared for an ocean voyage after an undisclosed international shipping company purchased it.

Google have once stated that the barges were being turned into “an interactive space where people can learn about new technology”, but given their long determination to even admit they owned them, and having little or no information since, that remains to be seen.

Have Google abandoned the projects or is this just a further development in the magical mystery barges? Only time will tell.

Thank you LA Times for providing us with this information.