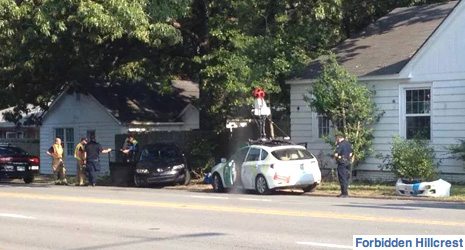 The Google Street View Car has been involved in an accident after it was travelling the wrong way down a one-way street, which is kind of ironic given that this car is supposed to be helping others to navigate roads, when its drivers seem at a loss for how to drive themselves.

the Google car suffered significant damage to its front end and the other car was totalled. The Google car, a 2010 Subaru Legacy was being driven by 28yr old Alexander Spurr, who said he attempted a U-turn, but accidentally came out onto an adjacent road. At this point they struck the side of the other vehicle, with the victims car also suggesting to local police that the Google Car must have run a red light for the collision to happen.

The driver of the Mazda, a 22 year old construction worker received treatment at a local hospital for bruised ribs and whiplash after a catscan and X-Ray and I fully suspect he’ll be taking Google for everything he can.

Thank you TheSmokingGun for providing us with this information.