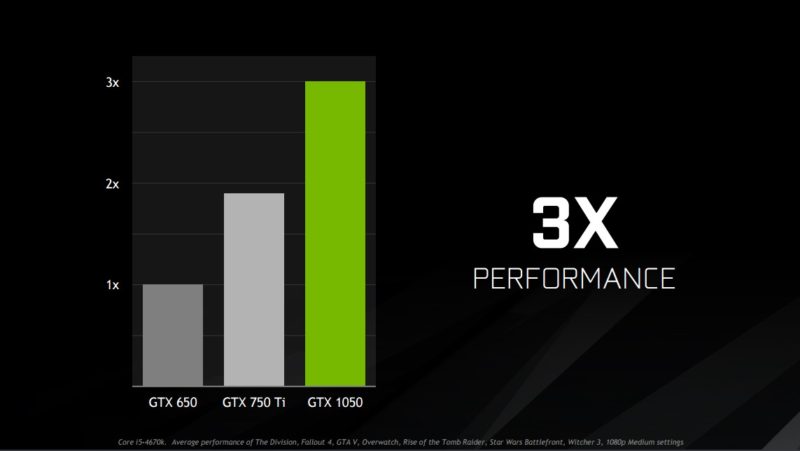 NVIDIA has just officially announced their latest budget graphics solution which provides a good performance boost compared to previous generation offerings. The GTX 1050 is part of the Pascal architecture and built on a 16nm FinFET manufacturing process. This new architecture brings a number of benefits including lower power consumption, simultaneous multi-projection and much more. Despite a few leaks showing different models, the question remains, how powerful is the GTX 1050? To be perfectly clear, any benchmarks outside of NVIDIA’s testing are still under NDA and will be revealed in due course. However, NVIDIA’s press deck gives us an insight into the kind of gaming experience you can expect. Apparently, the GTX 1050 will provide 3 times the performance of the GTX 650 and uphold a good boost over the GTX 750 Ti.

Rather bizarrely, NVIDIA hasn’t included comparisons to the GTX 950 or GTX 960 which suggests the performance benefit is relatively slim. Here we can see some actual numbers comparing the GTX 1050 to the GTX 650 and a Skylake system without a discrete graphics card. Please note, GTX V and Gears of War 4 were run at medium settings while Overwatch was benchmarked on High. Also, Dota 2 and World of Warcraft were tested while running the highest preset. Of course, all tested was conducted on a 1080p display. 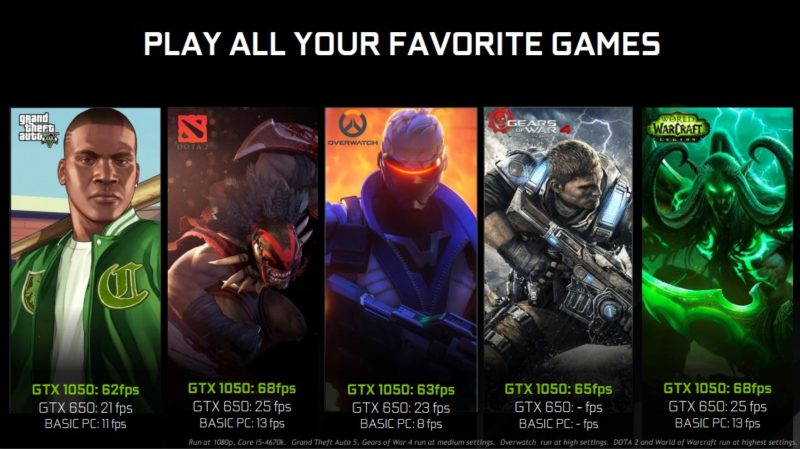 This is an interesting dataset and the performance looks good, especially in GTA V and Gears of War 4. On the other hand, I would prefer some numbers compared to the GTX 950 and RX 460, although the latter is being a little idealistic. Whatever the case, the GTX 1050 looks like a solid option for budget users and I’m looking forward to consumers getting their hands on NVIDIA’s latest product.