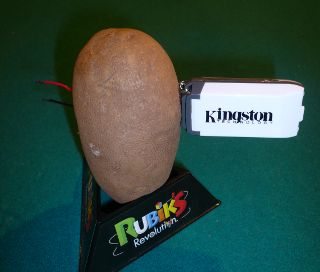 We’ve all heard the joke of people running games on “toasters” and “potatoes” when they load slowly into a match, but is it actually possible to run a PC directly from a potato?

A few hackers from the Netherlands successfully installed a USB version of Linux onto a spud back in 2008, allowing them to run a small command to edit a text file in Vi. The commands were sent in binary to the Linux kernel via a set of black and red wires.

“A potato doesn’t have a CPU, memory space or storage so it was quite a challenge” Johan Priest said. Priest went on to say that they weren’t able to install a bulky (compared to the reduced kernel) version of Linux such as Ubuntu or Fedora so they settled with “Damn Small Linux”.

The group responsible for this feat have been attempting to install Linux onto obscure items such as light bulbs, Gameboy Colours and even a puppy (I don’t want to know where the USB stick went) but wanted a challenge and so they settled for a potato.

The group also previously installed Linux onto a Shetland pony back in 2005 but saw fierce competition from other hacking groups and decided to take it a step further. They were looking to install the operating system onto savoury snacks such as a cracker but a competing hacking group from Norway beat them to the mark.

Thanks to BBSpot for the information and the image!