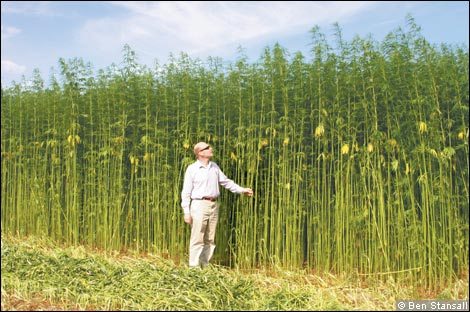 A newly published data set shows that using hemp fibres is a much cheaper way to build super capacitors that perform equal if not better than those made from graphene.

Lets get one thing straight right away, we’re talking about hemp here, not marijuana or cannabis as many pages are reporting. These are two completely different plants from the same family and with a similar look. The hemp plant has zero Tetrahydrocannabinol (THC) and there for it is impossible to get high from smoking them. This is a purely industrial plant that already is used in thousands of different products and with thousands more application uses. It is one of the, if not the most, versatile plant we have on this planet.

And now super capacitors can be added to the list of uses. The fibres are superheated into carbon nano sheets which are then layered into a capacitor. The resulting unit is one thousand times cheaper and just as, if not more, effective than graphene capacitors. These particular hemp fibres are mostly found in bio waste, so these folks might just have stumbled across the holy grail of recycling.

A lot of major companies have invested a lot of money into graphene itself and it will be interesting to see what there next move will be. To ignore this new research or cut their losses and move with the time.

Thank you wccf tech for providing us with this information.