Inno3D have utilized three 90mm fans capable of detecting GPU temperatures and switching to a 0dB profile during idle usage scenarios. This means you can easily play casual games requiring a small percentage of GPU utilization while maintaining silent operation. Furthermore, when the fans are switched off, the GPU’s power consumption can reduce slightly although the effect is pretty minimal. The graphics card also opts for a large copper base heatsink with 5 high flux heat pipes in the form of a 3x6mm and 2x8mm configuration. As a result, the GPU can effectively dissipate the thermal build-up from one area to another and compliment the 118pcs aluminium fins heatsink. Overall, this level of cooling prowess is necessary to offer excellent overclocking headroom without having a negative impact on load noise levels.

Changing the cover plates has a dramatic effect on the graphics card’s visual design and allows the end-user to choose a colour scheme which fits their build. At first, the mechanism felt rather fragile, and I had to use some force to dismantle the stock plates. Eventually, the covers loosened and changing them became an absolute breeze. All you have to do is insert a hex key into the four mount points, and progressively unscrew the fitting before lifting the covers off.

While the red theme is a visual treat, my personal favourite has to be the white finish. This is mainly due to the lovely contrast between the white cover plates and the black fans. It works really well and there’s not that many GPU products on the market barring GALAX’ HOF range to cater to systems with a white focus.

Here we can see the GPU’s triple slot design which looks pretty spectacular and emphasizes the level of cooling hardware throughout. This does means the product weighs over 1.2KG and measures a total of L282mm, W110mm and H43mm. As always, it’s important to check your chassis’ restrictions before purchasing any hardware. Despite this, it’s not the longest GPU out there, and the only real consideration is the use of three expansion slots.

To leverage the extra overclocking performance, the GPU requires an 8-pin and 6-pin PCI-E connectors. 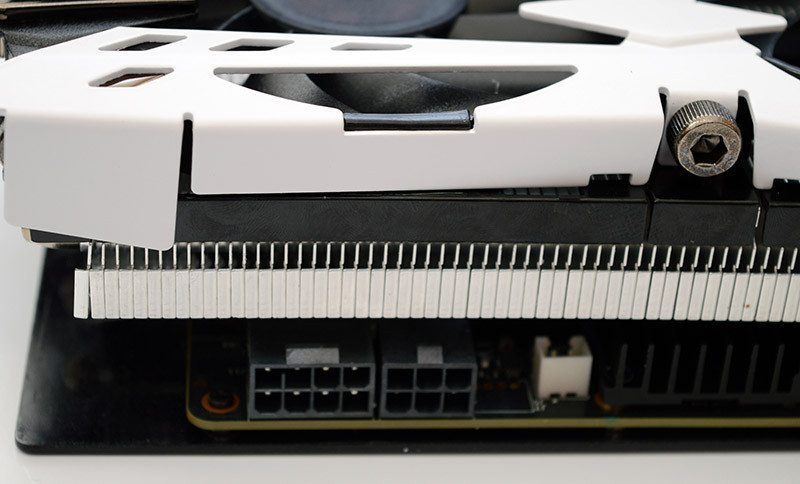 The backplate protects the PCB while adding much-needed rigidity to prevent GPU droop. At over 1.2kg, it’s imperative for the backplate to reinforce the GPU and keep it in an optimal position. From an aesthetics standpoint, the backplate doesn’t look overly special and there are definitely more attractive options out there. On the other hand, this is a subjective comment and down to an individual’s taste.

In terms of connectivity options, the graphics card has a DVI-D port, three DisplayPort 1.2 and single HDMI 2.0 connector capable of powering a 4K display at 60Hz. 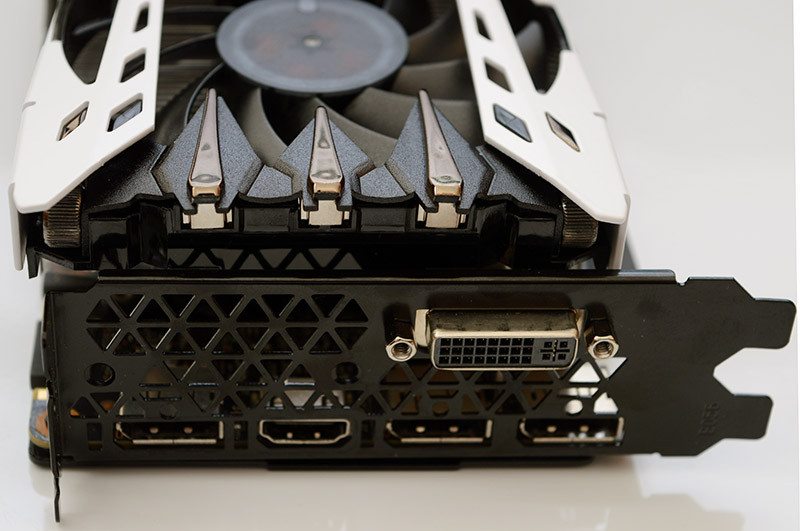