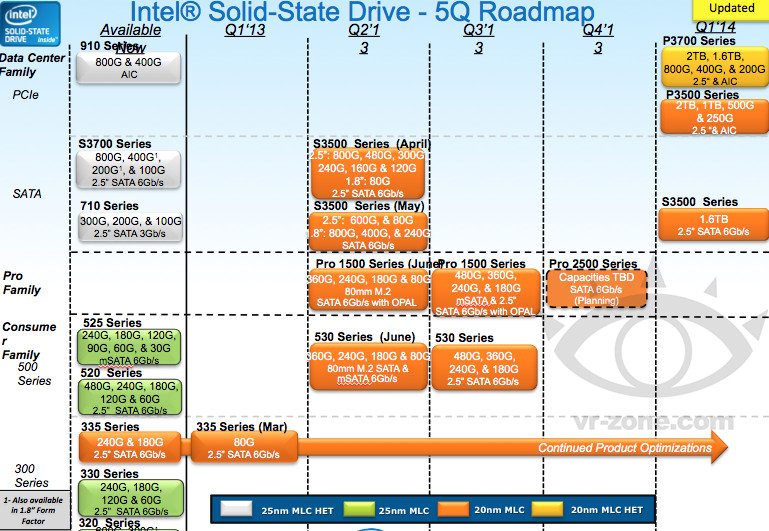 A leaked product roadmap from VR-Zone suggests that Intel is very close to launching its next-generation of performance-orientated consumer SSD. The 530 series of SSDs from Intel will succeed both the 520 and 525 series of SSDs. The 530 Series SSDs from Intel will feature the latest 20nm MLC NAND flash but unfortunately are still stuck using the same LSI-Sandforce SF-2281 controller we have seen on SSDs for the past 2 years or so. Of course this controller will have all the latest revisions and firmware updates allowing it to maximise performance, compatibility and reliability.

The roadmap suggests we should of seen the 530 series last month but apparently the launch was delayed by a month and we will see the new 530 series between the 8th and 12th of July. There will be three form factors for the new SSDs. 2.5″ SATA (7mm), NGFF M2 and mSATA. Capacities will be 80GB, 180GB, 240GB and 360GB for the NGFF M2 and mSATA form factors. The 2.5 inch SATA form factor gets 180GB, 240GB, 360GB and 480GB form factors. Performance and pricing details will come in the next 10 days or so as we get closer to the launch.