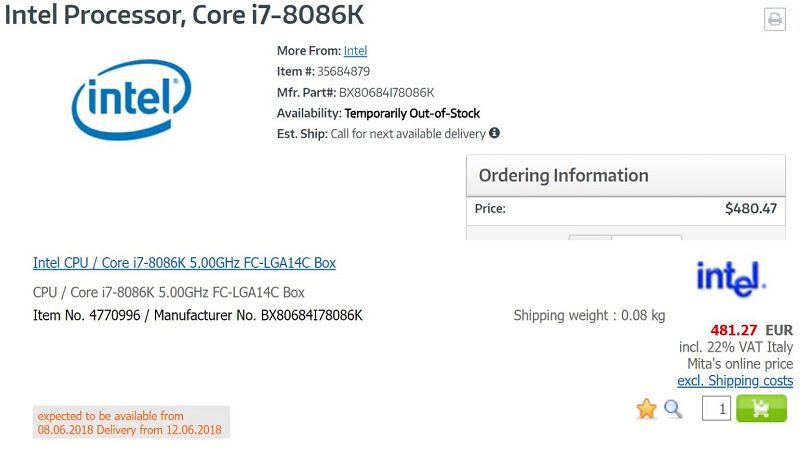 For the last couple of months, rumors have been swirling about a special 8086 CPU from Intel. The rumored chip is meant to commemorate the 40 year anniversary of the 8086. That chip marked the start of the modern x86 instruction built from that chip onward. While earlier rumors are fuzzy, the new reports from retailers lend more credence to the numbers. More interestingly the new chip will reportedly hit a high 5GHz clock speed at stock.

Intel is calling the new chip the Intel Core i7-8086K. Compared to most other Intel chips it is quite a monster at 5 GHz stock. This comes despite a total of six-cores and 12 threads. Some reports do peg the clock speed at 4 GHz base with a boost to 5 GHz. Depending on how Intel tuned Turbo Boost, the 5GHz speed might just be a single core. The chip has the BX80684I78086K part number and is compatible with the LGA 1151v2 meaning 300 series chipsets.

Given that the original 8086 launched on June 8, 1978, that is the likely date for the new chip. It is also smack dab in the middle of Computex so we may see the announcement then. However, the retail stock won’t arrive until sometime after that. One source is stating that the new chip will cost about 400 GBP. That is about ~ 50 GBP premium over the slightly slower i7-8700K. As the chip is not soldered, users can delid.

While 5GHz is quite a nice number to hit, its not the first time a consumer CPU has hit that speed. Most notably, AMD managed that with the FX 9590 from the Bulldozer family. Of course, the Intel chip will have a lot more performance on tap. It is still notable for being the first Intel chip to be stock 5 GHz. Given the premium over the i7-8700K, it will be interesting to see what it will offer on top of the extra 300MHz boost.