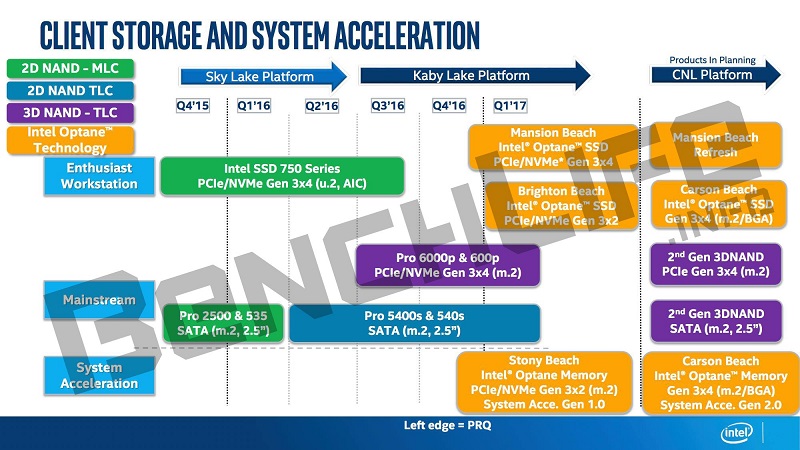 When Intel and Micron first revealed 3D XPoint, one of the first usage scenarios that came up was for storage. Using their new memory technology, the goal is for 3D XPoint to act as a level between NAND-based SSDs and DRAM RAM. The first consumer products are set to arrive shortly and we’ve now gotten our first leak of  the new lineup. First up is the Optane Memory 8000p from Intel.

Before we can reach the capacities necessary for system drives and SSDs, Optane Memory will act as a System Accelerator. This will sit between the system memory and system storage and help cache IO. Codenamed Stony Beach, the 8000p lineup will come in 16GB and 32GB capacities. Leveraging  the NVMe protocol at PCIe Gen 3.0 x2 bandwidth in the M.2 form-factor, the 16GB drive offers 285,000 read and 70,000 write IOPS and the 32GB  offers 300,000 read and 120,000 write IOPS.

Given the specific requirements of System Accelerator, it’s not known how support will be like. Intel previously offered a NAND based SSD caching solution, SRT (Smart Response Technology), which required specific platforms for support. Given that Kaby Lake is launching at the same time, I expect that will have support for sure but is not known if previous platforms like Haswell or Skylake will work.

Honestly, the low capacity of Stoney Beach might not be the best showcase of 3D XPoint. That will likely come with Mansion Beach and Brighton Beach which are meant to come in SSD capacities. These drives will also target the enthusiast segments so we can expect higher performance due to that as well. Hopefully, we’ll get a clear roadmap from Intel soon.